NEW ORLEANS -- The Houston Rockets traded forward K.J. McDaniels to the Brooklyn Nets on Thursday just before the 3 p.m. ET trade deadline in a move, according to a source, to add salary-cap space.The Rockets also traded Tyler Ennis to the Lakers in exchange... 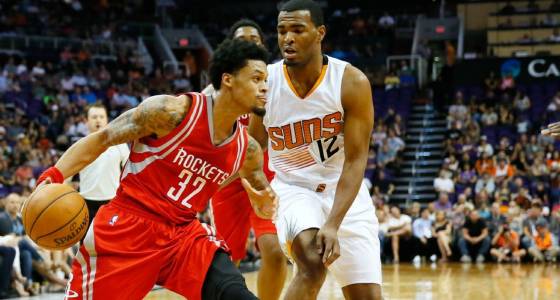 NEW ORLEANS -- The Houston Rockets traded forward K.J. McDaniels to the Brooklyn Nets on Thursday just before the 3 p.m. ET trade deadline in a move, according to a source, to add salary-cap space.

The Rockets also traded Tyler Ennis to the Lakers in exchange for fellow guard Marcelo Huertas. Houston is expected to waive Huertas.

The trades will give the Rockets $3.5 million in cap space, which a source said they will use in an attempt to sign players who have been bought out.

What are the Nets getting in K.J. McDaniels? Can Houston get another player with its new cap space? Kevin Pelton grades the trade.

How does Tyler Ennis fit in L.A.? Are the Rockets set up for more moves after the deadline? Kevin Pelton grades the trade.

McDaniels, who's 6-foot-6, 205 pounds, just couldn't get into coach Mike D'Antoni's rotation and played 212 minutes in 29 games. At the start of the season, D'Antoni wanted McDaniels to become a wing defender, but he struggled and fell behind Corey Brewer and Sam Dekker at small forward off the bench.

Last month, McDaniels was almost traded to Cleveland for Mike Dunleavy Jr., but the Rockets pulled out of the deal. Instead, Dunleavy was eventually traded to the Atlanta Hawks for Kyle Korver.

McDaniels said at the time he understood the business of the NBA, and despite limited playing time, his goal is "to remain ready."

In the summer of 2015, McDaniels signed a three-year, $10 million contract as a restricted free agent with the Rockets. The objective was for McDaniels to get significant playing time, but that never occurred.