College basketball undergoes constant evolution, a form of Darwinism that can turn well-established fixtures into long-forgotten relics. The four-year superstar went the way of the dodo. The notion of geographical alignment of conferences vanished. Playing... 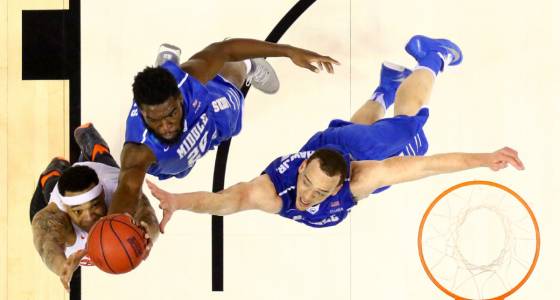 College basketball undergoes constant evolution, a form of Darwinism that can turn well-established fixtures into long-forgotten relics. The four-year superstar went the way of the dodo. The notion of geographical alignment of conferences vanished. Playing the Final Four in an actual basketball gym grew quaint.

“I, 100 per cent, think mid-major teams getting at-large berths is not only diminishing, but — what is it when we have a creature that’s about to die?” Southern Illinois coach Barry Hinson said. “It’s on life support. It’s getting ready to be an extinct species.”

As lower-tier conference tournaments begin this coming week, almost every mid-major team faces grim and pressurized circumstances: Win the tournament and its automatic berth into the 68-team NCAA field that will be announced March 12, or plan on spending March Madness at the National Invitation Tournament.

The NCAA bracket will still be loaded with mid-major teams who win automatic berths via their conference tournaments. But the dearth of at-large entries will alter the feel and the possibilities of the tournament. Watching an Illinois State try to topple a power conference opponent has been part of the character and, for many fans, appeal of the NCAA tournament moreso than, say, a first-round matchup between Minnesota and Texas Tech.

In the zero-sum game of NCAA tournament berths, inequality between the haves and have-nots appears to be growing. In 2006, George Mason advanced to the Final Four out of the Colonial Athletic Association. Over the next seven seasons, Butler, VCU and Wichita State followed suit from mid-major conferences. While Butler won the Horizon League to earn its berths in the seasons it advanced to consecutive national title games, Mason, VCU and Wichita all earned at-large berths, seeded between ninth and 11th.

As television rights deals have boomed in recent years, the majority of the money has flowed into the coffers of major conferences, which amplifies their resource advantages. An even more insidious culprit may be conference realignment, which has sapped opportunities from mid-major conferences in both obvious and subtle ways.

The effects surfaced last March in stark fashion. If you group the American Athletic Conference and the Atlantic 10 among power conferences, Wichita State was the only mid-major team to earn one of 36 at-large berths.

This season, undefeated, top-ranked Gonzaga and No. 20 Saint Mary’s of the West Coast Conference should be locks to make the field. While Middle Tennessee State of Conference USA and No. 25 Wichita State and Illinois State from the Missouri Valley Conference, to name three, have resumes the committee will have to consider, it’s possible this year’s bracket again will yield just one mid-major at-large entrant.

“The eye of the needle for teams outside the power conferences is getting narrower and narrower,” Horizon League commissioner Jonathan LeCrone said.

Jerry Palm, the bracket expert at CBSSports.com, compiles a mock bracket every week during the season, updating his projections daily as March approaches. Every season, he said, he has plan for which conference tournament upsets could throw his prediction into disarray. When a mid-major favourite loses, it often means he has to replace an at-large team, because the top-ranked mid-major would make the field as an at-large and knock out some other team. This year has been different.

“When we get to championship week, it always seems like we need two or three bid-stealers,” Palm said. “This year, it’s hard to see where the bid-stealers would come from. There just aren’t any at-large candidates from the smaller conferences.”

Mid-majors must deal with the same issues they have always faced: the difficulty (if not impossibility) of scheduling home games with power teams that make too much money off home games to sacrifice them; the resource imbalance; the perception battle. Conference realignment may be the most important factor in the recent plunge in at-large teams.

Having been raided itself by the ACC, the Big East survived by plundering other conferences in 2013. Creighton, Butler and Xavier jumped to the new Big East from, respectively, the Missouri Valley, Horizon and Atlantic 10. Creighton’s departure provides a keen example of how damaging losing just one school could be.

One effect of Creighton’s absence is obvious: It meant the Missouri Valley had one less well-established program capable of contending for an at-large berth most every season. It also meant potential contenders lost two chances every season to notch an impressive victory, two crucial opportunities to burnish their case.

“This is the first time the Missouri Valley has only two top-100 teams in a decade,” Palm said. “It’s hard to resume-build in that league any more. You used to see four or five top-100 teams a year.”

It also became less likely for an MVC school to climb into the top 100 of the Rating Percentage Index, a formula the NCAA tournament committee relies on to judge teams. The formula is based in part on strength of schedule, so when a quality team flees a conference, it affects every team’s rating. Hinson estimated that the Missouri Valley, ranked 12th in conference RPI, would be sitting at eighth with Creighton in the league.

“If they leave, that’s 18 games you don’t get against that top-25 team,” MVC commissioner Doug Elgin said. “It does have almost a multiplier effect.”

Both Elgin and LeCrone, the mid-major commissioners, lamented the dearth of at-large mid-majors without complaining. “I’ve been very hesitant to argue in a public forum the odds are stacked against us,” LeCrone said. “I would just use that energy to try to get better.” But he also pointed out that metrics like RPI can “over-penalize” leagues with particularly poor teams at the bottom, who can drain an opponent’s RPI just by showing up. They also shrink the margin of error.

“If you’re Illinois State and you get beat at a bottom-tier league school, the national media is going, ‘Oh, they’re out,’ ” Hinson said. “It’s so magnified. You’re not under the same microscope as a Power Five school. The rules aren’t the same.”

Hinson, whose Salukis scrimmaged Middle Tennessee State at the outset of the season, said MTSU was the best team they’ve played this season other than Louisville. “It would be a travesty” if the Blue Raiders, who are 24-4 overall, 14-1 in Conference USA, don’t make the field, Hinson said. But he also said he expected they would be left out if they do not win the C-USA tournament.

“It’s Robin Hood,” Hinson said. “The rich get richer and the poor get poorer. Until you find a different evaluation process or expand the tournament, you’re gonna have this every stinking year.”

AT-LARGE BID: Berth in the NCAA Tournament by invitation, rather than by winning a conference championship.