Rickie Fowler beats weather, demons and everyone in breakthrough

PALM BEACH GARDENS, Fla. — Rickie Fowler knew this wasn’t going to be easy.Sure, he took a four-shot lead into Sunday’s final round of the Honda Classic on PGA National’s daunting Champion Course, but he also took a dubious career 0-for-4 PGA Tour... 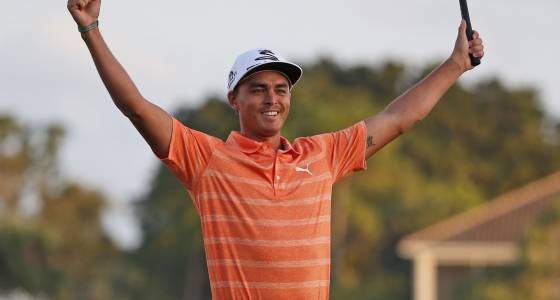 Sure, he took a four-shot lead into Sunday’s final round of the Honda Classic on PGA National’s daunting Champion Course, but he also took a dubious career 0-for-4 PGA Tour record into the day when trying to convert 54-hole leads to victories.

Then there was the weather. After a benign three days in South Florida, the wind gusted to more than 20 miles per hour in the climactic final round, wreaking havoc with club selection and confidence over pressure shots.

And then there was Gary Woodland, who made an early charge, melting Fowler’s four-shot lead to one shot when he birdied No. 13 to get to 10-under while Fowler was playing No. 12 at 11-under.

But none of those negative distractions took Fowler’s eyes off the prize: Winning the tournament and putting an end to that aggravating narrative that he could not close deals.

Moments after Woodland cut the lead to one shot, Fowler buried a 40-foot birdie putt on No. 12 to make it a two-shot lead. And then on the 13th, he made a 25-foot birdie putt to take a three-shot lead and he never looked back, winning the tournament by four shots, finishing on 12-under par with Woodland and Morgan Hoffmann sharing second at 8-under.

“It feels great to finally get the goose egg out of that stat,’’ Fowler said of his 54-hole lead record. “It wasn’t easy. I saw Gary was coming, trying to make a run there and I just had to hold on.’’

Back at his home in Las Vegas, Fowler’s coach, Butch Harmon, watched it all unfold on his TV, hoping the work he’d done in a session with Fowler on Friday was going to get the job done.

“It’s a big day for him,’’ Harmon told The Post by phone. “Great for his mojo, for sure, because any time you win it’s a confidence boost.’’

Despite an outward appearance that exudes confidence, Fowler’s psyche had been shaken in the last year by his inability to close out tournaments when he was in the lead.

He lost a two-shot lead to Hideki Matsuyama with two holes to play at the Waste Management Phoenix Open. He lost the final-round lead at Wells Fargo when he shot 74. And he shot a back-nine 39 in The Barclays final round that took him from the lead into a tie for seventh.

Even at last year’s Honda Classic, after seizing the 36-hole lead, Fowler shot 74-71 on the weekend to sink to a tie for sixth.

An unsightly narrative to Fowler’s career was forming.

This led NBC analyst Johnny Miller to say this before Sunday’s final round: “I think Fowler really needs this win. He’s got a chance to be a great player, and right now he’s a ‘wannabe’ a bit in that regard with just three wins.’’

“I think losing last year in Phoenix and in Charlotte did hurt his confidence as far as putting himself in position and getting it done’’ he said. “So this is big for many things.’’

After Fowler positioned himself to win by scratching out a third-round 65 during which he didn’t have his best stuff, but was 7-for-7 in scrambling, Harmon delivered this text to him Sunday morning: “You didn’t have your best ball striking day, but you got that out of the way. So now it’s time to show everybody who the real Rickie Fowler is.’’

And so he did.

Harmon is well aware of the perception that continues to follow the 28-year-old Fowler: That he’s more style than substance with his high profile and litany of lucrative endorsements not backed up by enough wins.

“I can see where they’re coming from, because golf is all about winning,’’ Harmon said. “Rickie himself was very honest this week when he said, ‘Look, I’ve got to close the deal more often.’ So he knows that. Rickie has a very high profile and he makes an awful lot of money because of that profile.

“But he’s going to have to win to clarify his want or the public’s want for him to be considered as one of the best young talents in the world. And this goes a long way to help with that.

“He’s definitely hungry, there’s no doubt about it,’’ Harmon went on. “He wants to win badly. Yeah, they make a lot of money, but as I’ve always told my guys, ‘If you’re in this just to make money then we’re wasting our time, because this sport is about winning.’

“It’s what you’re known for, it’s what your career will be highlighted with — the tournaments you win. Winning is everything … and winning takes care of everything.’’