CLEVELAND -- By the time “LeBron James” showed up on the caller ID on Tyronn Lue’s cellphone on a Thursday afternoon nearly a month ago, the Cleveland Cavaliers were in dire need of something, anything to kick-start a once-promising title... 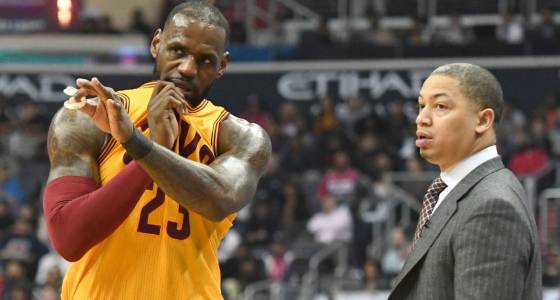 CLEVELAND -- By the time “LeBron James” showed up on the caller ID on Tyronn Lue’s cellphone on a Thursday afternoon nearly a month ago, the Cleveland Cavaliers were in dire need of something, anything to kick-start a once-promising title defense that had seemingly gone awry.

The Cavaliers were on their way to a 7-8 record in the month of January, a shocking stain on the résumés of both James and Lue. The last time a James-led team had a losing record in a calendar month in which he played at least 10 regular-season games was back in February 2006. As for Lue, during his maiden playoff voyage as head coach last year, Cleveland lost only five games over two months. The Cavs' sub-.500 mark in January included losses to lesser teams such as Sacramento, New Orleans and Dallas.

James and Lue, during a phone call that lasted about 10 minutes, came up with a plan for the Cavs’ defense that has since revived their season: simplify and advance.

Lue, in his first full season as the lead man on the sideline, had begun tinkering with the Cavs’ defense on a game-to-game basis. Sometimes it was to protect one of his players against a poor individual matchup; sometimes it was out of curiosity to see how his team looked running a particular scheme so he could decide whether he wanted to use it down the line; sometimes it was because of an injury or rest situation and he was trying to compensate with the rest of the lineup.

Sometimes it worked. But when it didn’t?

“The changes, it was good at times,” Lue told ESPN. “At times we don’t have the smartest guys.”

Whether their lack of retention was from an absence of brain power or paltry practice opportunities is up for debate. At one point from late December through early January the team went 18 days -- or roughly the length of training camp -- without a full practice.

What was indisputable in that chat between James and Lue was that something needed to be done. And so, as if channeling Pearl Jam’s lyric, “I changed by not changing at all,” the pair attempted to fix Cleveland’s defense by just going back to the basics.

“We’re just going back to our staple,” James said. “We just want to get back to what we do. No matter if the offense is scoring, no matter how they’re playing, let’s just stick to that first, and then if we need to make adjustments we will. So everybody is getting more and more comfortable with what we’re doing, what we’ve been doing in the past, and it’s helped out a lot.”

Cleveland has gone 10-2 since that phone call as it heads into Saturday’s game with the Chicago Bulls (8:30 p.m. ET, ABC).

One team source told ESPN that he thinks the commitment to going back to the simplified defense was just a trick to get everyone to give more on both ends.

“During the bad stretch, we were not playing hard or making the efforts needed,” he said.

Cavs veteran James Jones said it gave players no option other than playing hard if they wanted to stay on the floor.

“It really just took away excuses,” Jones told ESPN, alluding to how some of the team’s slippage could have been blamed on Lue’s past experimentation. “The coverages are simple and guys can execute the coverage. And if they can’t execute the coverage, then coach will find someone that will. That just keeps it simple, even though this is a very complex game.”

The correlation between the Cavs’ defensive effort and offensive improvement is actually not so complex. An unencumbered mind will allow instincts to kick in. And the Cavs have a collection of talent that knows how to enhance one another’s games when they are all in a flow.

“I’ve been saying it all season,” guard Kyrie Irving said. “Our staple is on the defensive end. When we’re not playing up to our capabilities, teams take advantage of it. They make us pay, and then we try to use our talent to get back in the game offensively. So for us, we hold our hand on the defensive end; when we’re playing at a high level we’re tough to beat, because when we’re getting out in transition guys can’t match up.”

There is still work to be done. A stats board -- posted by the entrance to the Cavs’ locker room at Quicken Loans Arena, showing NBA leaders in defensive field goal percentage -- is a constant reminder of that. They have two boards in their locker room: league standings and defensive field goal percentage, so it's clearly a priority. There are 15 slots on the board, and for quite some time the chart has shown the top 14 teams ranked the way they should be, with the Cavs crashing the party at the bottom in the No. 15 slot, only the 15 is changed to whatever number reflects their true ranking. The Cavs are currently 16th, allowing opponents to shoot 45.5 percent. Golden State is first, giving up just 43.6 percent.

The Cavs are also just 19th in defensive efficiency at the moment. Last season on their march toward the first championship in franchise history, Cleveland finished a similar 14th in field goal percentage allowed, but were far better in terms of defensive efficiency coming in 10th in the NBA. Cavs sources tell ESPN that the defensive schemes were the same last season. Perhaps the dip can be explained by personnel changes -- ballhawk Matthew Dellavedova and rim protector Timofey Mozgov are gone -- as well as by injuries that have plagued the roster.

If the reaction of James and Lue to the crisis moment didn’t necessarily improve the Cavs’ defense, it did allow the team to recognize that it can at least feel better about itself when everyone makes effort a prerequisite.

“Sometimes if something doesn’t work, you’ll say, ‘Man, let’s change this!’” Lue told ESPN. “Well, let’s do it harder first and then if it doesn’t work, then we can adjust. But we were starting the games just trying to protect certain people. It was good for us, though. Good experience. But we got back to doing what we do, and are comfortable doing.”

Lue said the Cavaliers will use some of the things he experimented with come the playoffs. He already liked the way his guys showed their ability to blitz the ball handler on certain pick-and-roll sets. With practice and film study concentrated on a single opponent for extended time in a postseason series, Cleveland will have a better chance of executing Lue’s whims.

At the very least, that phone call built some trust between the Cavs’ coach and star player, and Cleveland is better for it, both in spirit and in the standings.

“It was just a conversation,” James said. “Something that you see, something that you feel with the team. That’s the great thing about having a coach like T-Lue. I respect his mind and he respects mine. I just believed at that point in time that was what was needed for our team to move forward. When I told him that, he was like, ‘Yeah I’ve been thinking about that the same way.’ So that’s pretty cool.”