The arrow is pointing up for Obi Melifonwu where the NFL draft is concerned, and his calendar is beginning to fill as a result.The Pittsburgh Steelers, New Orleans Saints and Seattle Seahawks have all arranged for the former UConn safety to visit their facilities,... 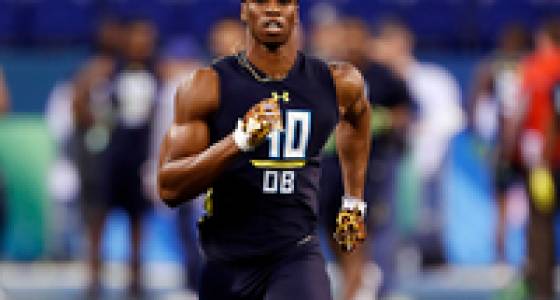 The arrow is pointing up for Obi Melifonwu where the NFL draft is concerned, and his calendar is beginning to fill as a result.

The Pittsburgh Steelers, New Orleans Saints and Seattle Seahawks have all arranged for the former UConn safety to visit their facilities, according to the Houston Chronicle.

But those visits don't figure to be his last.

Melifonwu has parlayed an impressive week at the Reese's Senior Bowl with an even more eye-opening performance at the NFL Scouting Combine, making him one of the draft's fast risers. At the combine, he combined linebacker size (6-foot-4, 224 pounds) with a 40-yard dash more suited for a cornerback (4.40), and combine-best marks in the vertical jump (44 inches) and broad jump (11-9).

The result for Melifonwu has been a palpable buzz about his draft prospects. An AFC college scouting director sees him as a top-40 talent, and NFL.com analyst Bucky Brooks believes Melifonwu is creeping into the first-round discussion. As such, interested NFL clubs that pass on Melifonwu in the first round might not get another chance at him. The Steelers' first two draft picks are at Nos. 30 and 62 overall. The Seahawks' first two picks come at Nos. 26 and 58, while New Orleans' come at Nos. 11 and 32, thanks to a trade with the New England Patriots. New Orleans also will pick at No. 42 overall.

They'll each get a closer look with his pending visits, and he might look familiar to the Seahawks -- Brooks sees him as a Kam Chancellor-like player at the next level.