Galleries Videos CONTACT ADVERTISE
Famagusta 24°
clear sky
BUSINESS EDUCATION ENTERTAINMENT HEALTH POLITICS SCIENCE SPORTS TECHNOLOGY
12:08 Guide To Online Sports Betting: How To Choose A Sportsbook
08:28 What Are Some Reasons to Consult a Brain Injury Lawyer?
09:24 Blockchain Solutions for Enterprises: How To Increase Efficiency And Profitability
07:06 How To Deal With A Car Crash In New York
17:43 Tips to keep in mind while choosing the casino site
11:34 Relation Between Employee Theft and Pre-employment Screening Check
04:37 Search your own desired site to play sports for betting
18:00 Top 3 Career Path Options for Business Analysts Preview
15:35 The history of Imen Jane, who is the influencer and the charges on the...
18:48 Sebastian Vettel's Greatest Races
BIST
1124
GOLD
459.180
USD
7.6460
GPB
9.7999
EUR
8.8844
Breaking News
Top 3 Career Path Options for Business Analysts Preview
Close

DETROIT—The Detroit Red Wings, after 25 straight playoff appearances, are in the unusual position of selling at the trade deadline. Detroit traded defenceman Brendan Smith to the New York Rangers on Tuesday in exchange for a second-round pick in 2018... 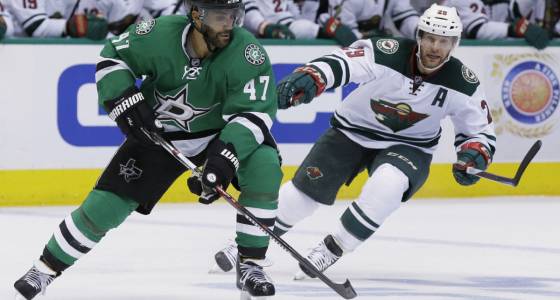 DETROIT—The Detroit Red Wings, after 25 straight playoff appearances, are in the unusual position of selling at the trade deadline. Detroit traded defenceman Brendan Smith to the New York Rangers on Tuesday in exchange for a second-round pick in 2018 and a third-round pick this year.

“I was in negotiations on an extension with his agent,” Red Wings general manager Ken Holland said. “But I told him if I got a deal I couldn’t pass up, we would have to go in another direction. And that’s what happened.”

Holland may also deal veteran forwards Thomas Vanek, Steve Ott and Drew Miller along with their expiring deals because the franchise will likely miss the playoffs for the first time since 1990.

The trade deadline is Wednesday at 3 p.m. ET.

“With where we are in the standings, I’m looking at the people we can trade and I’m trying to get more picks,” Holland said. “The more picks you have, the better your odds are.”

The Smith trade gives the Red Wings 10 picks in the draft this year.

The Rangers bolstered their blue line with the trade, hoping to stay competitive in the Metropolitan with division-leading Washington, Pittsburgh and Columbus..

The Stars received young forward Mark McNeill and a conditional fourth-round pick in the 2018 NHL draft.

Oduya first played for Chicago from 2012-15, with nine goals and 34 assists in 219 games. He appeared in 71 playoff games with the Blackhawks, including their Stanley Cup championships in 2013 and 2015.

The 35-year-old Oduya has one goal and six assists in 37 games this season with the Stars.

The 25-year-old Davidson played 28 games this season the Oilers, recording one assist. The Lethbridge, Alta., native has five goals and 13 points in 91 career games.

Desharnais, 30, produced four goals and 10 points in 31 games this season with Montreal.

Stalberg, an unrestricted free agent after the season, signed a one-year, $1.5 million deal with Carolina last July. He had nine goals and three assists in 57 games with the Hurricanes.

The Senators, in second place in the Atlantic Division, previously acquired Alexandre Burrows from Vancouver on Monday as part of their playoff push.

Carolina unloaded another pending free agent after trading defenceman Ron Hainsey to Pittsburgh last week. The Hurricanes, in last place in the Metropolitan Division, have 11 picks in the June draft, including seven in the first three rounds.