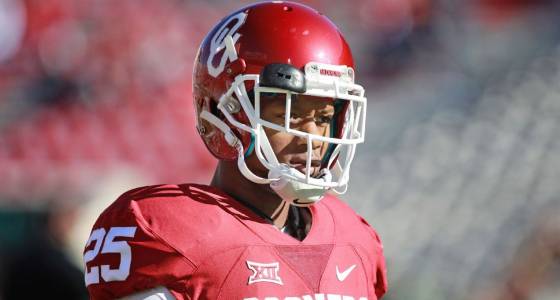 Amelia Molitor and Mixon settled on her accusation of intentional infliction of emotional distress. Molitor also had originally sued Mixon for negligence and willful and wanton misconduct, but an Oklahoma judge dismissed those two claims in November.

Friday, the two sides also issued a joint statement, in which Molitor and Mixon acknowledged they met privately, giving him the opportunity to apologize to her directly.

"I'm thankful Mia and I were able to talk privately," Mixon said in the statement. "I was able to apologize to her one-to-one. The way I reacted that night, that's not me. That's not the way I was raised. I think she understands that.

"Talking together helps move us past what happened. I know I have to keep working to be a better person, and this is another step in that direction. I love working with kids, and I'm looking for more chances to do that kind of work. I want to lead a life that inspires them, and I hope I can lead by example from today forward."

Mixon punched Molitor in 2014 at a sandwich shop near OU's campus. Mixon accepted a plea deal and was suspended from the team his freshman season with the Sooners. Surveillance video of the altercation, which showed Mixon throwing the punch that broke four bones in Molitor's face, was released by Mixon's attorneys in December, more than two years after the incident.

"I am happy we were able to bring the lawsuit to an end," Molitor said in the statement. "Joe and I were able to meet privately, without any attorneys, and talk about our experiences since that night. I am encouraged that we will both be able to move forward from here with our lives.

"From our private discussions I am satisfied that we are going to put this behind us and work towards helping others who may have found themselves in similar circumstances. I greatly appreciate his apology and I think the feelings he expressed were sincere. We both could have handled things differently. I believe if we had a chance to go back to that moment in time, the situation would not have ended the way it did.

"I'm finished talking about what happened that night with Joe. It's time to move on from that. I wish Joe the best of luck in his future."