Rays' Longoria unenthused about proposals to speed up game

PORT CHARLOTTE — Had intentional walks been automatic last season, LHP Enny Romero might still be with the Rays.3 Days Ago1 Week Ago2 Weeks AgoRomero's failure to execute in a September game against Yankees phenom Gary Sanchez, resulting in a sacrifice... 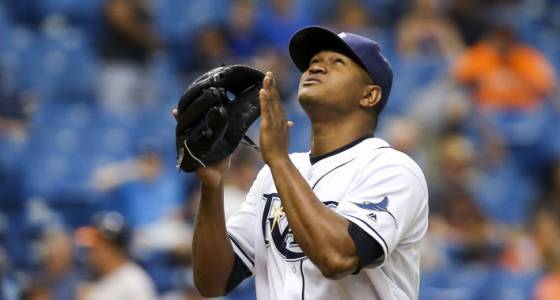 PORT CHARLOTTE — Had intentional walks been automatic last season, LHP Enny Romero might still be with the Rays.

Romero's failure to execute in a September game against Yankees phenom Gary Sanchez, resulting in a sacrifice fly rather than a free pass, was certainly a factor in his demise and his eventual departure via trade.

And it was an example of what actually can be exciting — one way or the other — about one of the most mundane plays, which is set to become automated for this season as the first of several potential rule changes.

Once commissioner Rob Manfred and players union chief Tony Clark get over their hissing match, decisions have to be made on what else can be changed for this season — yes, the one that starts five weeks from today — in an effort to quicken the pace of play and eliminate dead spots.

Most likely, only making the intentional walk automatic and adding time limits on replay requests (30 seconds) and reviews (two minutes) will be implemented. But Manfred eventually wants to go further, limiting mound visits by players, installing pitch clocks and further enforcing rules on keeping batters in the box.

Add Rays veteran 3B Evan Longoria to the list of prominent players who would rather leave things as they are.

Longoria points out that changing the intentional walk rule will have virtually no impact, as there were only 932 last year, one every 2.6 games. But his greater concern is what it could lead to.

"Myself personally and the intent of the Players Association is to not change the game so much that it's unrecognizable, and that's obviously something that's been a part of the game as long as it's been a game," he said. "If you change that, it opens the door for a lot of other things, so I don't want to see that changed.

"I think the pace of game dialogue is driven by other people, by the media, by outsiders, people that watch from afar or don't really understand the nuances of the game. I don't mind playing a 3-hour, 30-minute intense game — a nine-inning game. I don't know that over the course of my career that of all the changes we've made, that one has made a significant impact on the speed of the game, that I actually feel the game is faster because of those changes … if anything it has stayed on par or gotten longer."

Longoria hates the idea of a pitch clock because it will disrupt focus, he likes the replay system, he thinks players will find ways to game whatever rule changes are made and he suggests the best way to halt dead time is to shorten commercial breaks, though he knows that won't happen.

RAYS RUMBLINGS: Former longtime Rays VP/PR chief Rick Vaughn has accepted a position as executive director of Joe Maddon's Respect 90 Foundation. … Baseball America tabs the Rays as favorites to sign Wander Franco, the teen shortstop and nephew of big-leaguer Erick Aybar, who is the top prospect in the July 2 international class, and for about $4 million. … Still seems like Fox Sports Sun could bring back Rich Hollenberg as TV pre-/postgame host after all. … Contracts for the pre-arbitration players will be finalized over the next two weeks; early guess on a potential renewal is INF Nick Franklin, a Scott Boras client. … Hearing there will be a couple of interesting new food outlets at the Trop. … FanRag Sports' Jon Heyman threw out an eye-catching line in his latest column: "Even the Rays are thought to be worth close to $1 billion, and that's without a new/real stadium." … Pete Rose was entertaining at last weekend's induction to the Ted Williams Hitters Hall of Fame, joking the Trop was the only stadium he'd been to that he hadn't gotten a hit in and asking if "the Rays have any opportunity for a 75-year-old?"