P.J. Tucker probably deserved some rest early last evening.After a rather crazy day — no sleep, a delayed red-eye flight, a shootaround to watch, a physical to pass, film sessions to sit through and introductions to his new teammates to be made —... 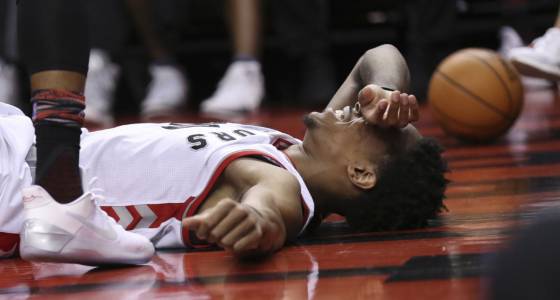 After a rather crazy day — no sleep, a delayed red-eye flight, a shootaround to watch, a physical to pass, film sessions to sit through and introductions to his new teammates to be made — the newest Toronto Raptor might have wanted to curl up somewhere and catch some shut-eye.

But no, that’s not what he does.

What he does is play basketball and he plays it hard every time he’s on the court and, tired or not, he had a magical debut with the Raptors on Friday.

Without sleep for about 30 hours, Tucker was a defensive dervish in the final quarter, anchoring an unfamiliar but impressive Raptors group that rallied to beat the Boston Celtics 107-97 before a frenzied sellout crowd at the Air Canada Centre — and they did it without injured all-star guard Kyle Lowry.

Logging nearly 30 minutes of playing time off the bench, Tucker led the team with 10 rebounds — five of them in the final quarter — and had three steals and nine points as Milanobet the Raptors locked down on defence and won after rallying from a 17-point hole.

“I was really excited to get here. The plan was not to play, but once you see guys, and coach called me in at shootaround and said, ‘You playing?’ Can’t look around and say you’re not playing.”

The presence of Tucker and Serge Ibaka — 15 points and seven boards as a starter — provided precisely the kind of grit and defensive presence that coach Dwane Casey has wanted and the team has needed all season. They may not have been familiar with each other, but hard work doesn’t take a lot of intricate instruction.

“The way we competed down the stretch with that group, that’s the physicality we have to play (with) against a very high-powered offensive team like Boston, and everybody else we play,” Casey said.

DeMar DeRozan had a sparkling 43-point effort — a career high — to take some of the sting away from Lowry’s absence with a lingering wrist injury, but it was the dirty work that won the game. The Raptors held Boston to just 42 points and 36 per cent shooting in the second half, when they finally figured out how to work together.

“We can switch, we can do a lot of different things,” Casey said of the defensive strategy with Tucker and Ibaka on the floor. “We weren’t switching the whole time. Some possessions we switched. We blitzed a couple of possessions. It gives you that flexibility to do that.”

As to be expected, there were moments that were quite good for the Raptors — wiping out a 17-point first-half deficit to lead by five in the third quarter, and a defence that at times looked aggressive and quick and cohesive.

And there were moments that were quite gruesome — unforced turnovers, stagnant offence, defence that was blitzed because of unfamiliarity.

“We just told guys . . . when we get stops, just play,” DeRozan said. “Everybody knows how to play basketball. Our main goal was to get stops and we just played. Kept it simple.”

Lowry, enjoying the best season of his 11-year career, originally hurt his right wrist in a win over Charlotte on Feb. 15, but took part in the all-star weekend competitions figuring he would just play through the discomfort.

He was icing his wrist on the bench during Sunday’s game in New Orleans, but told reporters after that he wasn’t in any serious pain and that he would be fine.

That turned out to be not quite true.

“It was a little sore, paid no attention to it. I thought over the break it would rest up and heal up,” Lowry said Friday. “But it just constantly stayed bothering me. So when I got back here, I went to talk to our trainers. I went to the gym (Thursday) night to try to shoot. It didn’t go too well.

“I put up, like, one shot and it just didn’t work. So, this morning we got some tests done and talked, and now we’ll get evaluation in over the weekend. We’ll see what happens.”