Ranking the QB position in MAC

Eight of the 12 programs in the Mid-American Conference feature returning quarterbacks let by Toledo and Miami.  Here is a quick ranking of the position heading into spring:1. Toledo: Logan Woodside rewrote the record books last season for the Rockets... 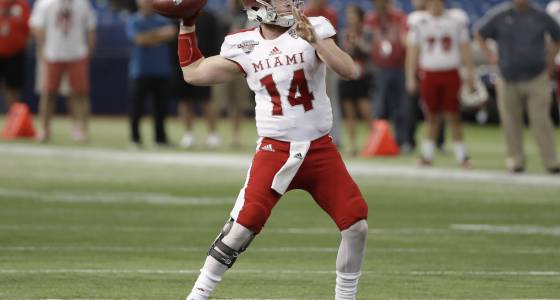 Eight of the 12 programs in the Mid-American Conference feature returning quarterbacks let by Toledo and Miami.  Here is a quick ranking of the position heading into spring:

1. Toledo: Logan Woodside rewrote the record books last season for the Rockets after completing close to 70 percent of his passes for 4,129 yards while leading the nation with 45 passing touchdowns. He’ll be backed up by senior Michael Julian and sophomore Mitchell Guidagni, providing Toledo with some much-needed depth heading into 2017.

2. Miami: Gus Ragland jump started the Red Hawks – stepping into the starting role after an 0-6 start – leading the program to six consecutive wins and the first bowl appearance since 2010. He finished with 1,537 yards passing and 17 touchdowns with just one interception. Billy Bahl, who has 12 career starts, leads a crowded group behind Ragland including Noah Wezensky, Justin Martin and Jackson Williamson.

3. Bowling Green: James Morgan stepped into the starting role five games into last season but the Falcons continued to struggle on the offensive side of the football with the team finishing next-to-last in passer rating (107.7). Morgan is the favorite heading into spring with a trio of underclassmen around him including Grant Loy and Elijah Cunningham.

4. Eastern Michigan: Brogan Roback returns as a fifth-year senior after starting eight games last season where he had six 300-plus passing yard games for the Eagles. Todd Porter started the first five games of last season and should push Roback in spring. Chris Creighton added some depth with 3-star recruit Jairus Grissom, who could redshirt in 2017.

5. Akron: Thomas Woodson started nine of the Zips 12 regular season games last season, finishing with 2,079 yards with 18 touchdowns. Unfortunately for Akron, Woodson had offseason shoulder surgery and won’t be available to practice until the summer. Tra'Von Chapman, who was inconsistent throughout much of last season, will battle with Virginia transfer Nick Johns during spring practice.

6. Kent State: Three different players started games at quarterback last season headlined by junior Nick Holley, who started seven out of the last eight games leading Kent State to a 2-5 record. He is one of four players on the roster with at least one career start under their belts.

7. Buffalo: Iowa State transfer Grant Rohach earned the starting nod last season but were limited to just three starts with freshman Tyree Jackson stepping up with a majority of the action. Jackson will step into a larger role in 2017 with new quarterbacks coach Jim Zebrowski.

8. Ball State: Riley Neal went through a roller coaster ride of a season for the Cardinals in 2016 as first-year coach Mike Neu looked to develop some consistency from his young quarterback. Neal started all but one game with junior Jack Milas getting a start as well.

9. Ohio: Greg Windham started the first seven games of last season for the Bobcats before a leg injury forced him out, opening the door for freshman Quinton Maxwell, who started the final seven games. Maxwell enters spring as the favorite to earn the starting job in 2017 but junior college transfer Nathan Rourke could push him heading into fall camp.

10. Western Michigan: The Broncos have a lot of new faces including new coach Tim Lester. One familiar face not around will be Zach Terrell. The four-year starter has moved on leaving the reigns of the Broncos offense to Tom Flacco. Flacco will battle with redshirt freshman Jon Wassink for the outright job this offseason.

11. Northern Illinois: Injuries and inconsistencies forced Northern Illinois to use four different quarterbacks last season providing this year’s team with more questions than answers heading into 2017. Ryan Graham and Daniel Santacaterina will battle for the starting job in spring along with incoming 3-star quarterback Rodney Hall in the mix as well.

12. Central Michigan: For the first time since 2012 someone other than Cooper Rush will start the season at quarterback for Central Michigan. Shane Morris enters the fray as a possible replacement after transferring from Michigan in the offseason.