Rangers fall from 3rd in division

CaptionCloseNew YorkCam Atkinson and Alexander Wennberg each scored twice to lead the Columbus Blue Jackets to a 5-2 victory over the New York Rangers on Sunday.Sergei Bobrovsky stopped 28 shots to tie his career high with his 32nd win. Josh Anderson also... 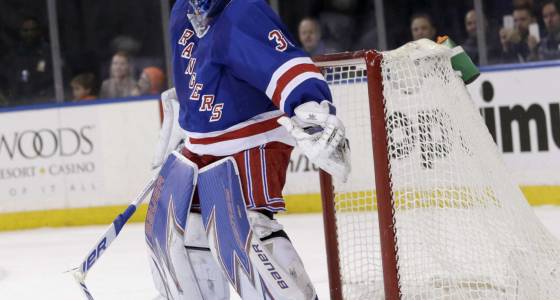 Cam Atkinson and Alexander Wennberg each scored twice to lead the Columbus Blue Jackets to a 5-2 victory over the New York Rangers on Sunday.

Sergei Bobrovsky stopped 28 shots to tie his career high with his 32nd win. Josh Anderson also scored and Oliver Bjorkstrand had two assists to help the Blue Jackets win for the fourth time in five games.

Columbus won for the second time in two days after its bye week and moved past the Rangers into third place in the Metropolitan Division.

The Blue Jackets won three of five in the season series — including both games at Madison Square Garden — after losing seven straight meetings coming in.

Rick Nash scored a tying goal for the Rangers early in the first period. Jesper Fast scored in the final second, and Henrik Lundqvist finished with 26 saves.

Bruins 6, Stars 3: Patrice Bergeron had two goals and an assist as Boston beat Dallas, improving to 6-1 under interim coach Bruce Cassidy. The Stars had tied the game in the second period after trailing 2-0. But Frank Vatrano and Bergeron scored on deflections 40 seconds apart in the second, and Bergeron added his 16th goal of the season in the third period. Brad Marchand and David Krejci scored in the first period for the Bruins. Marchand had two assists and Torey Krug had three assists. John Klingberg and Jiri Hudler had second-period goals for Dallas, and Tyler Seguin scored in the third.

Coyotes 3, Sabres 2: Radim Vrbata scored with 18.9 seconds left to cap a three-goal third period and lift Arizona over Buffalo. Vrbata also had an assist, and Max Domi and Jamie McGinn also scored for the Coyotes. Louis Domingue made 31 saves. Jack Eichel had a goal and an assist, and Evan Rodrigues also scored for the Sabres, who have lost three straight. Anders Nilsson stopped 26 shots.

Senators 2, Panthers 1: Kyle Turris scored the tiebreaking goal in the second period and Craig Anderson stopped 37 shots to lift Ottawa over Florida. Zack Smith had an early short-handed goal for the Senators. Jonathan Marchessault scored for Florida, and James Reimer made 31 saves.

Blackhawks 4, Blues 2: Artem Anisimov scored with 5:20 left in the third period to lift Chicago over St. Louis for its fourth straight win and ninth in its past 10. Tanner Kero added an empty-netter with 2.6 seconds left. Patrick Kane and Jonathan Toews both had a goal and an assist for Chicago, which pulled one point behind first-place Minnesota in the Central Division and Western Conference. Duncan Keith had an assist for his 500th NHL point. Magnus Paajarvi and Alex Pietrangelo scored for the Blues, who lost their third straight.