Last year it served as the site for the genesis of one of the most historic trades in NFL draft history.In Indianapolis, between watching more than 300 prospects show off their skills at the scouting combine, Rams General Manager Les Snead began laying the... 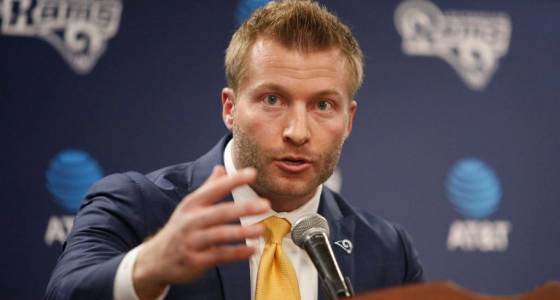 Last year it served as the site for the genesis of one of the most historic trades in NFL draft history.

In Indianapolis, between watching more than 300 prospects show off their skills at the scouting combine, Rams General Manager Les Snead began laying the groundwork for a blockbuster deal that enabled the Rams to move to the top of the draft to select quarterback Jared Goff.

The transaction with the Tennessee Titans cost the Rams six draft picks.

Early returns proved hardly overwhelming — Goff struggled in seven winless starts for a 4-12 Rams team — but whether the trade was worth it remains to be determined under new Coach Sean McVay and his staff.

A headline-grabbing trade is not expected to be on the Rams’ agenda this week when the combine begins at Lucas Oil Stadium.

Snead and McVay are among a contingent of about 45 Rams employees who will attend the annual talent bazaar in preparation for the April 27-29 draft in Philadelphia.

“There’s some obvious ones,” Snead said of the Rams’ needs, adding that without a first-round pick this year, the Rams will attempt to “make the most of the back end of the draft.”

The Rams on Friday were awarded two compensatory draft picks for the loss of 2016 free agents Janoris Jenkins, Rodney McLeod and Nick Fairley. That gives them eight picks in rounds two through seven, including the 37th overall pick and two picks in the fourth and seventh rounds.

So they will be on the lookout for receivers to improve what for two consecutive years has ranked as the NFL’s worst offense.

The Rams last August gave receiver Tavon Austin a $42-million extension and, judging from McVay’s comments since his hiring in January, Austin appears on track to become a centerpiece. The Rams are not expected to re-sign receivers Kenny Britt and Brian Quick, who are on their way to free agency. Pharoh Cooper and Mike Thomas played sparingly as rookies, and undrafted free agent Nelson Spruce was sidelined last season because of injuries.

The Rams are expected to add a veteran free-agent receiver or two but they also could utilize the draft.

“You can’t have enough playmakers,” McVay said. “Certainly, that’s something that we’re always looking to upgrade. That receiver position is very important —  a lot of yards and offensive production goes through that room.”

The Rams’ offensive line struggled last season but the team is expected to utilize free agency to improve that position group.

However, they will keep their eye on offensive linemen as well as running backs and tight ends at the combine.

Linebackers and defensive backs also are priorities as the Rams prepare to implement a hybrid 3-4 scheme under new defensive coordinator Wade Phillips.

UCLA’s Takkarist McKinley, who will reportedly have shoulder surgery after the combine, is part of an outside linebacker class that includes Vanderbilt’s Zach Cunningham and Alabama’s Tim Williams among others.

The lack of a first-round pick, Snead said, would enable the Rams to streamline their effort at the combine.

“There’s a good probability they’re gone,” he said of elite prospects that will be selected among the first 32, “so now let’s really focus on the ones that are going to be there.”

Before Snead, McVay and Rams’ front office personnel begin evaluating 40-yard dash times and conducting player interviews, there is a major piece of business to address.

Wednesday is the deadline for NFL teams to put the franchise tag on players. The Rams must decide whether to tag cornerback Trumaine Johnson for the second year in a row, sign him to a long-term deal or let him test the market as a free agent.

Last year, the Rams tagged Johnson rather than Jenkins, who signed a five-year $62.5-million contract with the New York Giants.  Johnson, coming off a seven-interception performance in 2015, earned nearly $14 million last season under the tag. He intercepted only one pass and was sidelined for several games because of injuries.

Tagging him again would cost the Rams nearly $17 million, according to several reported estimates based on a projected $168-million salary cap.

The Rams have spent the last three weeks evaluating their players and how they fit into Phillips’ defense, Snead said. They also have compared them to pending free agents.

“We like what Trumaine offers and we don’t want him to leave the building,” Snead said. “We’ve got a decision to make whether signing him long term or franchise him for the second year in a row, which we are OK doing.”