TORONTO -- Frederik Andersen is just four starts away from equaling his career high for a season set in Anaheim two years ago -- and there's still a quarter of the season to go.That's life as an uncontested No. 1 after his trade from the Anaheim Ducks to... 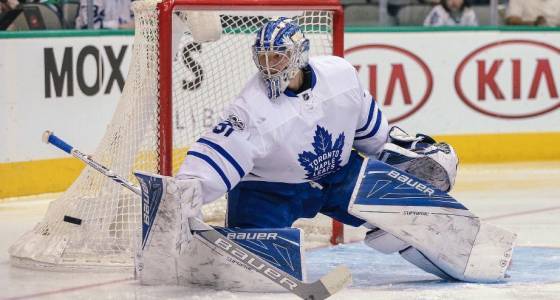 TORONTO -- Frederik Andersen is just four starts away from equaling his career high for a season set in Anaheim two years ago -- and there's still a quarter of the season to go.

That's life as an uncontested No. 1 after his trade from the Anaheim Ducks to the Toronto Maple Leafs last summer, subsequently signing a five-year deal worth $25 million -- and trying to prove that GM Lou Lamoriello wasn't out of his mind for putting his faith in the 27-year-old Denmark native who had been sharing the net with John Gibson last season.

Andersen's 24 wins are tied for 10th in the NHL, and although there have been ups and downs in his play, he has been the workhorse the Leafs had hoped for. And let's face it, Toronto's mediocre-at-times defensive coverage hasn't actually helped him, either.

If the move to hockey-crazy Toronto can be overwhelming to some, it hasn't been for Andersen, always gracious with his time for the media (even after a morning skate on game days, by the way, when some goalies around the league don't talk) and his warm smile most often greets those entering the dressing room on a daily basis.

Andersen sat down Wednesday with ESPN.com to talk Toronto, workload and coaches:

ESPN.com: My first question is a basic one and yet quite prevalent, given the workload you're taking on this season, for the first time as an uncontested No. 1: How does your mind and body feel right now?

Andersen: My body feels great. I haven't had too many issues throughout the year. And those that have come along, we've been taking care of them really well. The trainers here have been great. They do a good job of helping me maintain good health, knock on wood. And, mentally, I've been good. Lately I've been feeling good, it hasn't gone my way [in terms of wins] I guess, but it's one of those things if you keep doing the right things, it'll turn around eventually.

ESPN.com: Did you seek out any advice from other goalies about what it's like to take on a bigger workload for the first time in your career?

Andersen: Not so much. I talked to people I trust, like my agent and trainers. The coaching staff here and management have all been very helpful, too. They try to guide you and help you along.

ESPN.com: What's your communication like with head coach Mike Babcock in terms of mapping out when you're starting, and how far ahead do you look at that together?

Andersen: He doesn't really tell me too much [Andersen smiles], he just tells me when I'm not playing, I guess. Yeah, my communication is far more with [Leafs goalie coach] Stevie Briere. We talk a lot. We talk every day, about everything.

ESPN.com: What has been the bigger adjustment for you this year, becoming an unchallenged No. 1 for the first time in your career or arriving to this hockey-crazed market, where the spotlight shines brighter on you compared to where you started your career?

Andersen: The market has been good. Obviously, it's been different, but I haven't really felt the difference too much. I haven't let it get to me too much. It's been mostly a good thing. I've enjoyed the focus on hockey here. It's been fun so far. You can feel the excitement around the city and in the room too; we know we have a good group and we're building something very special. We've still got a ways to go, but we're going towards something really good.

ESPN.com: What's it been like walking around town, being in restaurants or the grocery store, what's the interaction with fans like?

Andersen: Yeah, it's pretty similar as it was in Anaheim -- when you've played there long enough, people who watch hockey know it's you. But you can also go a little bit unnoticed. It's been fun here. People have been respectful. I've always felt this way but if people ask for a picture, and it makes their day, I'm happy to do it.

ESPN.com: Have you grasped the history of this team, the fact they haven't won a Cup since 1967? I know so much of that has nothing to do with you current players, but just the historical aspect of being part of this team? You saw what it meant in Chicago in baseball for the Cubs to finally win.

Saturday's Stadium Series tilt at Heinz Field between the Penguins and the Flyers might be short of a sellout. So what, says Scott Burnside, if outdoor games still bring new fans to the sport?

Andersen: Yeah, we have a chance here in the future to change that, we want to be the group that brings it home to Toronto. Everyone wants to win the Cup, that's the bottom line for every player, but we'd love to bring it here. Given the history, it would make it even more special. Because one thing that's stood out a lot to me is how the alumni sticks around here, and you get to meet them and they tell stories. Every time you do something with them or you see them around, it's a good reminder of the history of this team and the franchise.

ESPN.com: Do you keep in touch with any of the Ducks, people back in Anaheim? They still have a very good team.

Andersen: Yeah, they've been doing well and playing solid, I've noticed their play the last little while. The guy I talk to the most is [Andrew] Cogliano, he was a great friend on the team. He's a really good friend of mine. We talk pretty regularly.

ESPN.com: Cogliano is from around these parts. Did he help you in terms of knowing what to expect in this city?

Andersen: Oh, yeah, for sure. He definitely helped me. He was here last summer when I came for the first time. He took me around a little bit and showed me around. He helped me a bit getting to know the city. Yeah, he's been an awesome friend to have.

ESPN.com: Last question, what's it like in this room when there's no one else around except the players, who is the loudest or funniest guy?

Andersen (laughing, pointing across the room): A lot of stuff points over there to Leo [Komarov]. He's definitely a loud guy, outspoken and not afraid to say something funny. He's got some good stuff sometimes. But it's very loose in here, a fun group to be in.