CHANDLER, Ariz. -- Leah Pritchett raced to her second straight Top Fuel victory to start the season Sunday and successfully defended her NHRA Arizona Nationals title.Pritchett beat Brittany Force in the final for the second year in a row at Wild Horse Pass... 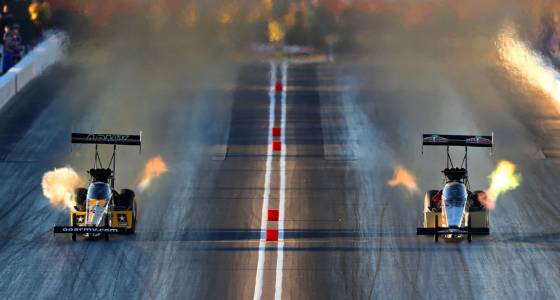 Pritchett beat Brittany Force in the final for the second year in a row at Wild Horse Pass Motorsports, finishing in 3.705 seconds at 328.22 mph. Pritchett has three career victories, also winning the season-opener two weeks ago in Pomona, California.

"I'm learning to do what it takes to get into that extreme, severe mindset of what it takes to do what we're doing," Pritchett said. "Honestly, I'm trying to keep up with my team for how well they're doing and make them proud of me as a driver and do the job that is expected of a Don Schumacher racing team and I think we're doing pretty OK with that. We're blessed with the equipment and the talent capabilities of the people and everyone that it takes to make it. I'm happy I can hold up my end of the bargain."

Pritchett is the first Top Fuel driver to sweep the first races since Gary Scelzi in 1997.