Power Rankings: Things are getting Wild

It's decision time for many teams as Wednesday's trade deadline approaches. We know that the Minnesota Wild are all-in. Will the league's top team follow suit and make some deals -- or stand pat? Meanwhile, the Chicago Blackhawks soar to No. 2, while the... 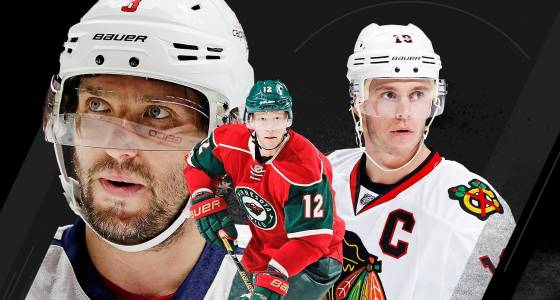 It's decision time for many teams as Wednesday's trade deadline approaches. We know that the Minnesota Wild are all-in. Will the league's top team follow suit and make some deals -- or stand pat? Meanwhile, the Chicago Blackhawks soar to No. 2, while the charging Calgary Flames see their playoff push recognized too. Here's how things shape up heading into the deadline:

Caps GM Brian MacLellan has said that the most he will do before Wednesday's trade deadline is tweak his roster via a depth move or two -- if he does anything at all. Of course, Wild GM Chuck Fletcher said the same before landing Martin Hanzal.

Chicago GM Stan Bowman added a depth piece of his own in Tomas Jurco -- who may yet develop into an interesting asset, a la Richard Panik. It's what the Hawks do.

I have absolutely no problem with what Wild GM Chuck Fletcher paid to land Hanzal as a rental center. The Western Conference is more wide open this season than it's been in a decade. The 2017 first-round pick that the Wild gave up will be low and it's not a great draft class. Fletcher was able to keep his top prospects. The Wild are all-in, and I love it.

Penguins GM Jim Rutherford added veteran defenseman Ron Hainsey and may not be done dealing. He loves to tinker at this time of year. But will he get to move Marc-Andre Fleury? That's the big question.

The Blue Jackets 12, New York (Islanders/Rangers) 2. That was the combined weekend score as Columbus pounded both New York teams in succession. You know who would look good in a Blue Jackets uniform? Pending unrestricted free agent Brian Boyle, that's who. Make it happen, GM Jarmo Kekalainen.

The San Jose Barracuda, the Sharks' AHL's affiliate, have won 14 consecutive games. No wonder San Jose feels like it goes 30 deep. Will Sharks GM Doug Wilson still add to that depth before Wednesday? He normally would.

There is no better fit for Kevin Shattenkirk than with the Blueshirts, such is New York's screaming need for a right-handed, puck-moving wizard. Having said that, the Rangers have given all the indications that they won't pay the crazy asking price for Shattenkirk. Let's see what gives.

David Poile, Nashville's veteran GM, is never shy to act at this time of year, and he probably will add a top-nine forward before Wednesday's deadline. But this team is just coming around now and doesn't need a big piece, in my estimation.

Edmonton GM Peter Chiarelli would like to add a bottom-six forward who has experience. Otherwise I don't sense a great desire to give up massive assets at this juncture. The young Oilers are just opening their window now, and have lots of time over the next few years to go crazy at the deadline.

I love the Patrick Eaves acquisition. The Ducks need more pop and got it in Eaves. And -- given how cap-challenged they are -- his salary was perfect. Is Anaheim done dealing? It has a surplus on D. But perhaps the Ducks will wait until the offseason to address that. It always depends on the offers!

The Senators, who sit just two points behind the Canadiens with two games in hand, can smell that Atlantic Division crown. Now GM Pierre Dorion will try to add a forward to help propel them down the stretch drive.

The streaking B's are 6-1-0 since their coaching change -- and right on the heels of Montreal and Ottawa for the division title. Can GM Don Sweeney throw them some trade-deadline candy?

Calgary GM Brad Treliving has brought in top-four blueliner Michael Stone and depth defenseman Matt Bartkowski and now will try to add a top-nine forward. The Flames have also looked at the goalie market, but I think Brian Elliott's play of late has given them confidence.

After three consecutive losses, it's decision time for Blues GM Doug Armstrong on Shattenkirk, his pending UFA defenseman. I say that unless Armstrong truly feels that this team can win a Cup with Shattenkirk in the lineup this spring, he will trade him.

The Islanders were waxed 7-0 at Columbus on Saturday but are only one point behind Toronto and still very much in the wild-card chase. I'm curious to see how GM Garth Snow operates before Wednesday's deadline. His team has responded under new coach Doug Weight. Do you really want to tinker too much with that chemistry?

The Habs had a gigantic overtime win at rival Toronto on Saturday night, their biggest of the season by far. Can they get going now? And will GM Marc Bergevin add anything before the deadline?

Kings GM Dean Lombardi hopes the 1-2 punch of Jonathan Quick (back from a season-long injury) and Ben Bishop (acquired from the Lightning on Sunday) can propel his team into the playoffs and beyond. It's a really interesting approach by the two-time Cup-winning GM.

Toronto's 13 loser points lead the NHL. Imagine where the young Leafs would be if they'd converted just five or six of those extra sessions into wins. Toronto could use a bottom-six upgrade up front and obviously almost anything on the back end, but at what price? This is a very interesting deadline for a Leafs team that has outperformed its original plan in terms of winning.

The Panthers have cooled down a bit since their big run. It might be better for Florida to not be too big of a buyer before Wednesday's deadline.

You may not believe me, but I think there's a chance GM Steve Yzerman would have dealt Bishop, a pending UFA, even had the Bolts been in a playoff spot. They made their decision in goal last summer when they signed Andrei Vasilevskiy.

Sell, sell, sell. That has to be what Philly GM Ron Hextall is focused on with his team in free fall. It's reality-check time for the Flyers.

Pending UFA defenseman Kyle Quincey is garnering some attention and will move before the deadline. We'll see if Devils GM Ray Shero can also find a home for pending UFA winger P.A. Parenteau.

Pending UFA blue-liners Dmitry Kulikov and Cody Franson are both available, and at least one of them should move before the deadline.

A few teams should face reality about their postseason hopes and not be looking to add players leading up to Wednesday's trade deadline.

What kind of value did each team get from the major trades ahead of the NHL trade deadline? We grade each trade here, including the Ben Bishop, Martin Hanzal and Patrick Eaves deals.

The Lightning are within striking distance of the playoffs, so GM Steve Yzerman might keep Brian Boyle and Ben Bishop. Plus, Detroit isn't shopping Mike Green (yet) and more trade deadline scoop.

Pending UFA winger Drew Stafford could help a contender. The Jets want to improve their blue line, whether that's before the deadline or during the summer.

I guess Ryan Miller is staying put now that the Kings have decided to go with Bishop instead. The Kings were debating between Bishop and Miller.

Patrick Sharp, Johnny Oduya and Jiri Hudler are among the pending UFAs the Stars would still move after finding Patrick Eaves a new home.

Hockeytown, USA, is in seller mode for the first time in 25 years. It really hard to get used to that idea. But sell the Wings will, perhaps starting with Thomas Vanek.

He will likely wait until the offseason, but GM Ron Francis must dip into his blue-line depth and use it to acquire a top-line center.

Young Coyotes GM John Chayka didn't want to wait until Wednesday to sell off all his parts, moving Stone last Monday and then Hanzal on Sunday. He got a huge haul of picks in return for Hanzal. Well done. Radim Vrbata, who will become an unrestricted free agent on July 1, remains available.

So we will soon see if Matt Duchene does indeed move before the deadline or the Avs wait until a bigger market opens up in the summer. It must be interesting to be Avs GM Joe Sakic right now, wondering if the best offer you get now is inferior -- or better -- than what could await in June. How does one know for sure?