GREENBURGH, N.Y. -- Kristaps Porzingis is unlikely to play Saturday night against the Philadelphia 76ers and could be out for the next few days with a sprained ankle.Porzingis suffered the injury Thursday in the loss to the Cleveland Cavaliers and wore a... 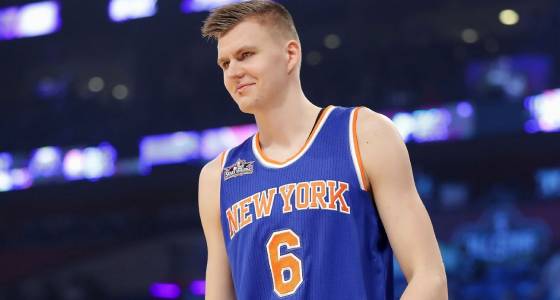 GREENBURGH, N.Y. -- Kristaps Porzingis is unlikely to play Saturday night against the Philadelphia 76ers and could be out for the next few days with a sprained ankle.

Porzingis suffered the injury Thursday in the loss to the Cleveland Cavaliers and wore a protective walking boot after the game. He shed the boot Friday, wearing sandals instead, and said there was no ligament damage in the ankle.

"There's a lot of swelling, but I can walk around no problem, and the swelling is going down, too, so it's getting better," Porzingis said. "No ligament damage, just a sprained ankle, swelling."

Head coach Jeff Hornacek said Porzingis is "doubtful" to play against the 76ers.

"He was all right walking around, but it might take him a few days," Hornacek said. "He'll probably be day to day."

Porzingis did not rule out playing on Monday against Toronto.

Hornacek also said center Joakim Noah (hamstring) is getting close to returning but still has not practiced.

"I think he's probably hitting that part where I think he's getting close," Hornacek said. "He hasn't practiced yet, so obviously you're going to have to practice once or twice to make sure that he doesn't re-pull it. That's kind of what happened last time when he re-hurt it. So hopefully in the next week or so he's back to action."