Five days after skipping exit meetings with management over frustration with the franchise, Kristaps Porzingis told the New York Post that he loves New York, indicating he wants to remain with the Knicks."Of course, I love New York. I love New York," Porzingis... 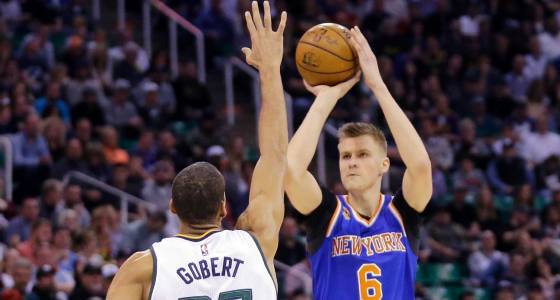 Five days after skipping exit meetings with management over frustration with the franchise, Kristaps Porzingis told the New York Post that he loves New York, indicating he wants to remain with the Knicks.

Porzingis skipped exit meetings with team president Phil Jackson and general manager Steve Mills due to frustration over what he perceives as the dysfunction and drama surrounding the organization, team sources told ESPN.com.

He is expected to head to Latvia for the summer this week without having met with Knicks management.

Porzingis declined to comment about his decision to skip exit meetings Wednesday.

"It's not the right moment to comment on anything [about it]," he told the Post. "I don't want to say anything.''

According to team sources, Porzingis is frustrated with the Knicks' lack of direction. Under Jackson, the Knicks have struggled in Porzingis' two seasons in New York, losing a combined 101 games. The team missed out on the playoffs for the fourth straight season.

The club was pegged as a potential playoff contender this season but struggled to develop any cohesion and stumbled through a 30-51 season.

The Knicks were also involved in several stories off the basketball court that drew attention this season, including an attempt to trade Carmelo Anthony. The club looked into trading Anthony before the trade deadline, and Jackson said Friday that Anthony would be "better off somewhere else" to pursue a championship.

It's not surprising that Porzingis would express his love for New York and be upset over the lack of direction surrounding the franchise at the same time.

Porzingis has expressed an affinity for New York since the Knicks drafted him with the No. 4 overall pick in the 2015 NBA draft. But he also spoke this season about frustration and confusion amid the Knicks' disappointing season.

In February, Porzingis said there was confusion from "top to bottom" due to multiple changes in schemes by head coach Jeff Hornacek and the coaching staff over the course of the season. He said there was "a lot of stuff that's not clear" to players and that it was "hard to play like that."

Jackson alluded to frayed relations between players and Hornacek and his staff in his news conference Friday.