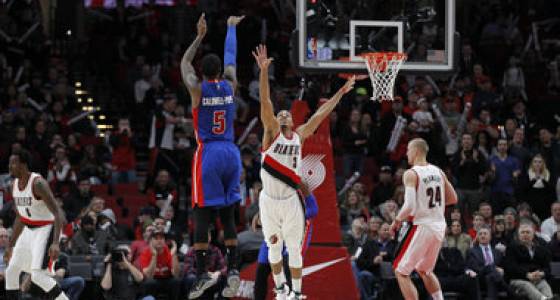 The Portland Trail Blazers (24-34) visit the Detroit Pistons (28-31) Tuesday at The Palace of Auburn Hills.

Here are the details:

About the Blazers: Portland is playing the final game of a three-game trip. The Blazers split the first two games, defeating the Orlando Magic (112-103 on Thursday) and falling to the Toronto Raptors (112-103 on Sunday). ... Damian Lillard recorded 28 points and eight assists in the loss to the Raptors. ... The Blazers are in 10th place in the Western Conference, 1-1/2 games behind the Denver Nuggets for eighth place. ... This is the second and final meeting between the Blazers and Pistons this season. The Pistons won the first outing, 125-124, in double overtime at the Moda Center in a game that was delayed by a day because of inclement weather. ... Allen Crabbe score a career-high 30 points in the loss. ... Lillard has made a three-pointer in a career-high 38 consecutive games, the second-longest single-season streak in franchise history behind Clifford Robinson, who did so in 41 consecutive games during the 1995-96 season. It's also the second-longest streak in the NBA this season behind Ersan Ilyasova (41). ... Backup forward Al-Farouq Aminu is averaging 14.3 points and 9.0 rebounds over his last six games. ...  CJ McCollum's first field goal in the loss at Toronto was his 500th this season. He's one of 10 players in the NBA with at least 500 field goals this season. ... Jusuf Nurkic, acquired by the Blazers before the All-Star break, is averaging 11.0 points, 8.0 rebounds, 2.7 assists and 2.3 steals in three games with Portland.

About the Pistons: Detroit has split two games since the All-Star break, defeating the Charlotte Hornets (114-108 on Thursday) and losing to the Boston Celtics (104-98 on Sunday). ... The Pistons led the Celtics by a point in the final minute, but Reggie Jackson missed a three-pointer and Boston used a five-point possession to eke steal a win. ... Andre Drummond recorded 17 points and 15 rebounds in the loss, but went just 1 of 11 from the free throw line. The Pistons were awful from the free throw line all game, shooting just 46 percent (16 of 35). ... The Pistons have won nine of their last 12 home games and have an 18-12 record at The Palace of Auburn Hills this season. ... Detroit is clinging to the eighth seed in the Eastern Conference, one game ahead of the Miami Heat. ... The Pistons score 20.6 percent of their points from mid-range, the second-highest percentage of mid-range scoring in the NBA. ... Drummond ranks second in the NBA in rebounding (13.8 per game) and fifth in double-doubles (39). Since he entered the NBA at the start of the 2012-13 season, Drummond has recorded a league-high 219 double-doubles. ... Backup guard Tobias Harris is averaging 16.9 points off the bench this season, which ranks third in the NBA among bench scorers behind Lou Williams (18.8) and Eric Gordon (17.5). ... Backup guard Ish Smith recorded a career-high-tying 16 assists during Thursday's victory over the Hornets. The last player to register 16 assists off the bench was Brevin Knight (17) during the 2004-05 season and the last Pistons player to do so was Kevin Porter (19) in January 1977. ... Smith had 16 assists and just one turnover, becoming the first Pistons player to log 16 or more assists and one turnover since Isiah Thomas in November 1993. Smith ranks third in the NBA assist-to-turnover ratio (3.58) this season.

Injuries: For the Blazers, Evan Turner (fractured right hand) is out, Festus Ezeli (left knee rehab) is not with the team and Tim Quarterman is on assignment in the NBA Development League. Detroit is not reporting any injuries.