“We know the clock is ticking,” said Marc Trestman, one of the men who will save the Toronto Argonauts, or not. A ticking clock can signify a lot of things: the steady passage of time, diminishing fractions of life, an alarm about to go off.... 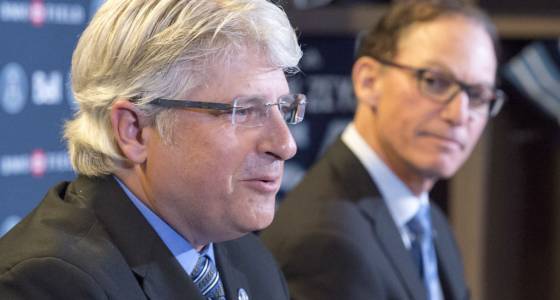 “We know the clock is ticking,” said Marc Trestman, one of the men who will save the Toronto Argonauts, or not. A ticking clock can signify a lot of things: the steady passage of time, diminishing fractions of life, an alarm about to go off. On Tuesday, the Argonauts finally hired Jim Popp as general manager and Trestman as their coach. It took too long but here they are, to rebuild whatever’s left.

“We felt that we wanted to take the time to step back and make sure that our initial assumptions were either validated, or that we were aware of all available options,” Argonauts president Michael Copeland said. “We wanted to get this right. That was our priority. We understand that it was unorthodox in terms of timing, but we’re prepared to accept that to get this right. And we got this right.”

You know, they probably did. Popp was the architect of the recent Montreal Alouettes dynasty, and has long been known as one of the best bird-dog, back-road football scouts in the game. No GM has sent more teams to the Grey Cup than his 10; only Wally Buono has overseen more wins. Trestman spent five seasons in Montreal and won two Grey Cups and 59 games before heading to the NFL. Considering where the Argonauts were a month ago, these are two professionals who have had success in this mercurial, surprisingly complex little league. That’s good.

“We’re obviously going to learn more by being here personally, but . . . culture change will happen, starting in the locker room,” said Popp. “They’ve been able to go out and fill some holes with some outstanding players, but we’re going to take what we have and we’re going to get the best out of these guys. I know they didn’t win as many games as they wanted to last year, but this team could have beat anyone, any week.

“We’re going to have to hit the ground running.”

Well sure, because the road here was too long, too winding, entirely unnecessary. The Grey Cup capped a breathless, struggling season for the rebuilt franchise at the end of November, with the house full of free tickets for a spectacular game. Toronto didn’t fire GM Jim Barker until Jan. 24; coach Scott Milanovich left to be the quarterbacks coach in Jacksonville, an NFL-like franchise, three days later. Argos president Michael Copeland said Popp was the top candidate immediately, but that the club wanted to make sure it considered all possibilities, “many of which were not traditionally explored,” whatever that means.

Copeland has talked about thinking outside the box and changing the game, but Popp was the obvious choice from day one — the only experienced, available CFL GM on the board, and luckily, available. If you believed that the decline in Montreal was at least partly precipitated by clashes with increasingly unreasonable ownership — which a lot of people do — then unless the Argos were going to hire Bill Belichick, Popp was door number one, two and three.

And it still took this long, and Copeland still stuck to the same overpromising routine he employed last year, saying: “As for our football team, I could not be more confident in our ability to come out flying this season under the leadership of these two men.”

It won’t be easy. They need to meet and assess the players they did not choose, assess the front office, rebuild the coaching staff, figure out the phones. Some big free agents avoided Toronto due to the instability. Popp needs to fill Trestman in on the rule changes that have been implemented in the past four years, which Trestman said he was unaware of. They need a better plan at quarterback. Trestman announced Tuesday that the 37-year-old Ricky Ray was already the starter, while also saying he had never seen backup Drew Willy play. That Willy trade is why they don’t have a first-round pick, by the way. There’s a lot of work to do.

And all that’s riding on them is the relevance of this lost, woebegone franchise. BMO Field didn’t fix the Argos, but the schedule is better this year. Seven of their nine regular-season home games are on Friday, Saturday or Sunday. There will be more affordable tickets, though maybe not enough.

But right now, season tickets are only about half of last year’s disappointing 7,000. Anyone can get lost in the big city, but the Argos are wandering the streets, nearly unrecognizable.

“I think a lot of people were waiting to see what we were going to do on the football side,” Copeland said.

Look, winning might not do anything, because Toronto can ignore a winning Argonauts team as easily as a losing one. But without winning, the Argos just don’t have a chance. Popp needs to prove he can still be a star GM; he and Trestman need to prove they can succeed without Anthony Calvillo at quarterback. The pressure is on. As Copeland says, “I think it would be very difficult for us to create the type of chance and be meaningful to people in the market if we’re not a successful team on the field.”

Meaningful is one thing, but the Argos are trying to clamber out of a grave. The clock is ticking, and while the alarm may have sounded too late, at least it finally went off.