Play It Forward Feb. 27-March 5: Lakers get the up-close look at the Cousins that got away

Ranking the top 10 sports events Feb. 27 to March 5 you won’t want to miss: NO. 1: NBA: PELICANS AT LAKERSDetails/TV: At Staples Center, Sunday, 6:30 p.m., Spectrum SportsNetThe script seems to have flipped as “La La Land” meets “The... 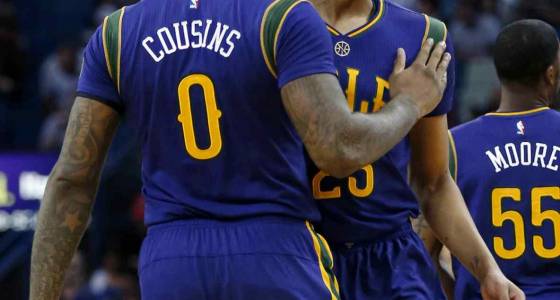 NO. 1: NBA: PELICANS AT LAKERS

The script seems to have flipped as “La La Land” meets “The Pelican Briefs.”

Newly cemented New Orleans teammates DeMarcus Cousins and Anthony Davis scored or assisted on 67 of the Pelicans’ 99 points in their first game together last week after the trade deadline. But they still lost to Houston by 30 points. They combined for 51 points and 29 rebounds one night later, and lost by 13 to Dallas, as New Orleans only had 34 second-half points.

Somehow in this equation, one plus one must equal three, as former Campbell Hall and UCLA star guard Jrue Holiday ups his game as the established point guard here, the one who ultimately feeds the bigs. Holiday took a leave of absence from the first 12 games of this season as his wife, former UCLA and U.S. national team star Lauren Holiday, underwent surgery to remove a brain tumor. New Orleans has played itself back into a contender for the No. 8 spot in the Western Conference and has less than two dozen games left to fix things and Holiday could be the biggest difference-maker.

“He’s not one of the real vocal leaders, but I think he kind of leads by example,” Pelicans coach Alvin Gentry said recently. “When he wasn’t with us, we didn’t have that on the floor — forget about all the leadership, he’s a talent, and you’ve gotta have talent in this league to win. So we missed the talent as much as anything, and then when you add in the leadership, and those other characteristics, it’s an integral part of this team that you’re missing.”

What’s missing from the Lakers, who failed to land Cousins at the trade deadline, can still be seen on a nightly basis.

NO. 2: NBA: ROCKETS AT CLIPPERS

Lou Williams made seven of his 11 3-point attempts in his first appearance with the Rockets last week, scoring a team-high 27 points. According to the Elias Sports Bureau, those are the most 3-pointers made by a player in his first game with a team since the 3-point shot came into the league in 1979. Obviously, the Lakers really didn’t need him around any longer.

Please allow this revised edition of the Galaxy re-introduce itself to the MLS solar system. Coach Curt Onalfo and French midfielder Romain Alessandrini are the two main newcomers, asked to mesh with Giovani dos Santos, Ashley Cole, Jermaine Jones, Dan Kennedy, Gysai Zardes and Robbie Rogers. But as for those last two — Zardes and Rogers aren’t fully ready to come back after suffering recent injuries. FC Dallas, who won the Supporters Shield last season, are the Galaxy’s first, and last, opponent in this 2017 regular season that starts here and ends Oct. 22.

Aside from the Kings’ scramble the last two months to make the playoffs, which looks better with Jonathan Quick back in the nets, Maple Leafs coach Mike Babcock actually has his team in postseason mode as well. Much of the push has come from 19-year-old Calder Trophy candidate Austin Matthews. As of last week, his 30 goals were tied with Jeff Carter and Patrik Laine for second best behind Sidney Crosby, and his 54 points were tied with Winnipeg’s Laine among rookies. After this stop, the Maple Leafs pop into Honda Center to face the Ducks (Friday, 7 p.m., FSW)

Also this week for the Ducks: vs. Vancouver, Sunday at 5 p.m., Prime Ticket

March arrives, and we need to spit-shine two more regular-season games before the Pac-12 Tournament in Las Vegas. UCLA (26-3, 13-3) will likely end up with the No. 3 seed, but USC could vary depending on how it finishes. Huskies freshman Markelle Fultz, fifth in the nation in scoring and first in the Pac-12 at better than 23 a game, put up 25 against the Bruins in a 107-66 loss on Feb. 4, a couple days after scoring 20 against the Trojans in an 82-74 defeat.

Details/TV: At Orleans Arena in Las Vegas, Friday at 6 p.m.

The news created going into this conference event was how No. 1 Gonzaga had its shot at a 30-0 start upended by BYU in the final game of the regular season, possibly creating a mess at the top of the polls and perhaps the upcoming NCAA Tournament seedings. The Cougars (21-10, 12-6) finished third in the WCC and draw the sixth-seeded Lions (15-14, 8-10) for this quarterfinal matchup. BYU defeated LMU twice in the regular season, 81-76 and 85-77.

Pepperdine (9-21, 5-13) drew the No. 8 spot and faces Pacific (10-21, 4-14). The Waves and Tigers split their regular-season series, each winning at home. The winner of this game has the honor of being the first opponent of the tournament for Gonzaga in the next round (Saturday at 7 p.m., ESPN2). Here is the bracket.

To absent friends. In last Friday’s semifinals, defending state champion Chino Hills lost to Mater Dei 83-80 in overtime and No. 1 seed Sierra Canyon of Chatsworth was knocked out by Bishop Montgomery. What’s left are the 30-1 Monarchs of Santa Ana, seeking their 23rd CIF-SS title and first since 2014, up against the 26-2 Knights of Torrance. Just know that once this title is determined, the focus will be back on the state championship, where Chino Hills and Sierra Canyon are back in the mix.

CIF-SS Division 1A final: Harvard-Westlake vs. Pasadena, Friday at 7 p.m.

NO. 8: COLLEGE BASEBALL: USC vs. UCLA

The Bruins have won three of the five games against the Trojans in this on-again, off-again Dodger Stadium Classic, including a 14-inning 5-3 triumph last year. In the preliminary game, the University of San Diego faces Michigan at 11 a.m. Parking runs $10 and seats are price from $5 (for students, available day of the game) to $60. More info: www.dodgers.com/classic

This World Golf Championship stop had been held at the Donald Trump-owned Doral Country Club, but this year it has been outsourced. World No. 3 Rory McIlroy, who has been limited playing since Jan. 15 because of a rib injury, aims to compete.

Current welterweight champion Woodley faces five-time kickboxing world champion Thompson in a rematch of their bout at UFC 205. Woodley retained his title after that fight ended in a majority draw.