Pierce on board with China's Jr. NBA program

NEW ORLEANS -- Since first traveling to China in 2000, Los Angeles Clippers star Paul Pierce has seen interest in basketball mushroom in the world's most populous nation.The 10-time NBA All-Star has visited China many times since that first trip, which preceded... 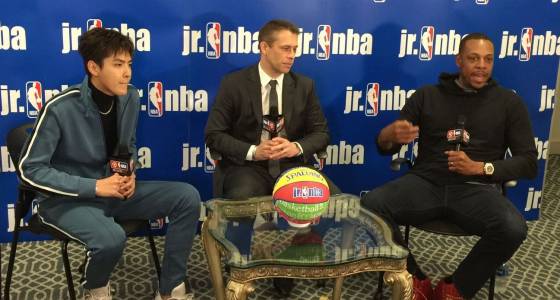 NEW ORLEANS -- Since first traveling to China in 2000, Los Angeles Clippers star Paul Pierce has seen interest in basketball mushroom in the world's most populous nation.

The 10-time NBA All-Star has visited China many times since that first trip, which preceded the emergence of Yao Ming as a global superstar. Over the years, he has spent time in Beijing, Shenzhen, Shanghai and Guangzhou and said he recognizes a special passion for the sport there that compares favorably to the United States.

"I feel like they love the game more than we do," Pierce said. "They're so excited in China to play the game of basketball. I enjoy going each and every year. They welcome you with open arms. The fans are amazing. I'm excited every time I go to China."

With that in mind, Pierce announced at the recent All-Star festivities in Louisiana that he will be a founding member of the Jr. NBA China Leadership Council, which will promote participation in youth basketball. Celebrity actor and singer Kris Wu and current NBA players Mike Conley of the Memphis Grizzlies, Aaron Gordon of the Orlando Magic, Zach LaVine of the Minnesota Timberwolves, Jeremy Lin of the Brooklyn Nets and C.J. McCollum of the Portland Trail Blazers will also serve as council members.

Certainly, it's good business for the NBA to continue promoting the sport in China. But Pierce, who announced in September that this season would be his last in the NBA, also firmly believes youth participants benefit from the Jr. NBA program by improving fitness and developing life skills.

"I'll be an adviser helping kids understand the game of basketball," said Pierce, who spent most of his 19-year NBA career with the Boston Celtics. "I'll make regular trips to China, do clinics, talk about the game and get people excited about the game of basketball and how the game can change you as a person. ... I want them [to] understand that the game is fun. You learn teamwork, confidence and how to get through adversity."

Wu is a longtime basketball fan who loves the game now as much as ever. He played in the NBA All-Star Celebrity Game last Friday and fondly remembers participating in Jr. NBA as a 15-year-old in Guangzhou, where his team won a regional championship and earned a trip to the national tournament in Beijing.

"I love the game," Wu said. "I enjoy it so much. I think it helped me out a lot in my life. I want to talk with the youth and give them a good energy, a good vibe. I can teach them what this game can bring to their lives. You don't have to be a professional player. It doesn't have to be a career. It could be a hobby. It could be exercise. It could be hanging out with friends."

"That tells us that we don't need to engage in brand awareness campaigns," Shoemaker said. "What we believe we should be doing is taking all those people who love the NBA, who love to watch NBA games, who buy NBA merchandise and play NBA video games and getting them -- or in some cases their children -- to play the game of basketball. That will have the most lasting impact of any of our activities in China."

The NBA partnered its Jr. NBA program with China's Ministry of Education three years ago to introduce an NBA-based basketball curriculum into elementary, middle and high schools around the country. Nearly 2,000 schools and about 500,000 children will be impacted by the initiative this year, Shoemaker said.

The league recently announced the launch of elite training facilities in Hangzhou, Jinan and Urumqi, and Shoemaker said it's likely Pierce will be tapped to instruct prospects during his future China visits. On the other hand, it's unlikely Pierce would choose to extend his playing career in the Chinese Basketball Association, something a number of former NBA players have done with great success. Still, it's intriguing to consider how many points he could average in the offensive-minded CBA.

Shoemaker then interjected to contend that Pierce, even at age 39, is drastically shortchanging himself.

"He's about halfway correct," Shoemaker said with a laugh.

Regardless, with Pierce, the NBA has enlisted the wisdom of someone who is both knowledgeable about China and passionate about evangelizing the sport of basketball there.