Picked away: Charlotte Hornets fall to LA Clippers 124-121 in OT

Blake Griffin scored a season-high 43 points and Chris Paul had 15 points and 17 assists as the Los Angeles Clippers held off the Charlotte Hornets 124-121 in overtime Sunday night.The Hornets lost despite getting 34 points from Kemba Walker and 31 from Nicolas... 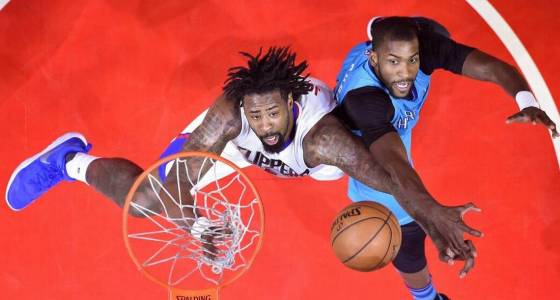 Blake Griffin scored a season-high 43 points and Chris Paul had 15 points and 17 assists as the Los Angeles Clippers held off the Charlotte Hornets 124-121 in overtime Sunday night.

The Hornets lost despite getting 34 points from Kemba Walker and 31 from Nicolas Batum, who shot 8 of 13 on 3-pointers.

Charlotte had a chance to win at the end, trailing by one late in overtime, but a poor pass by Walker was picked off by center DeAndre Jordan with six seconds to go. He followed Paul's miss on the other end with a dunk that all but sealed the victory.

The Clippers looked as though they had the game in hand late in regulation when Griffin hit a 3-pointer and then finished a three-point play to give Los Angeles a 113-108 lead with 48.2 seconds remaining in the fourth quarter.

But then Walker hit a 3 and added two free throws with 11.9 seconds left to tie it. Paul missed a 15-foot fallaway at the buzzer, sending the game to overtime.

The Clippers jumped out to a 19-8 lead but came out flat-footed in the second quarter as the Hornets opened the period with a 13-0 run.

The shooting of J.J. Redick and Griffin allowed the Clippers to recover and take a 59-51 advantage into the break. Redick had 19 points at halftime on 8-of-10 shooting, and Griffin had scored 13. Redick finished with 22 points.

Hornets: Second-year center Frank Kaminsky is suddenly on the rise. He's s averaged 17.7 points and 6.6 rebounds in his last nine games. His 13 rebounds Saturday against the Kings were a career high and he's had three double-doubles in his last six games after posting only one previously in his career.

Clippers: Paul reported no ill effects after playing 33 minutes in his first game back Friday from a torn thumb ligament. "He came out great. (But) you can see there are things he needs to work on," coach Doc Rivers said.

Hornets: Play their fifth of seven consecutive road games Tuesday, this time against the struggling Lakers (19-41), losers of four straight.

Clippers: Will host the Rockets on Wednesday, a team that beat Los Angeles by 24 points in Houston on Dec. 30. The Clippers played that game without Paul and Griffin.