This is the red carpet stretch of Peter V. Ueberroth’s life.Ueberroth will receive the Los Angeles Sports Council’s Lifetime Achievement award Monday night in a ceremony at the Beverly Hilton, an affair similar to last month’s Golden Globes... 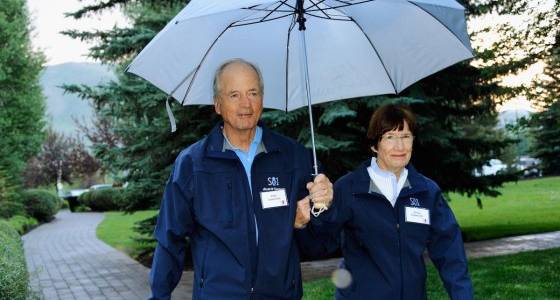 This is the red carpet stretch of Peter V. Ueberroth’s life.

Ueberroth,79, has also been bestowed with something of a lifetime achievement award by Merriam-Webster, a recognition that views with both humor and pride.

Sure enough there it is: Contrarian: a person who takes a contrary position or attitude; specifically: an investor who buys shares of stock when most others are selling and sells when others are buying.

Ueberroth has described himself as a “mountain climber by nature,” the contrarian who took the Olympic movement, Major League Baseball and the U.S. Olympic Committee to new heights by charting his own course, defying the skeptics, the experts almost every step of the way.

Sports account for a quarter of his nearly 60-year career. “Fifteen years of staying out of my natural habitat of being a businessman,” he said. But as head of the 1984 Olympic Games, MLB commissioner and USOC chairman showed his contrarian streak, investing, staking his reputation on three entities at a time when no one else was buying.

Much of Major League Baseball was financially and morally broke when Ueberroth took over as commissioner in October 1984. Ueberroth negotiated landmark TV deals with CBS and ESPN and steered the game through a series of drug scandals. When he took over only five franchises were profitable. By the time he left before the 1989 season, every franchise was either making a profit or breaking even and baseball as a whole was profitable for the first time since 1973.

Twenty years later, Ueberroth was convinced by five U.S. senators to become chairman of a USOC in crisis. The combination of escalating administrative costs and a drop in fundraising left the USOC facing a financial disaster that one USOC executive said was like a “a railroad train coming dead at us.”

Ueberroth streamlined the organization and within four years was able to double the funding to U.S. athletes.

But mainly Ueberroth will be remembered as the man who saved the Olympic movement by shepherding the record-shattering 1984 Games in Los Angeles at a time when many thought the Olympics were on the verge of extinction. Los Angeles won the Games by default when Tehran, the only other bid city, dropped out following the Islamic revolution.

“We followed all the M’s and the M’s had difficulties. You just go through those and each had of them had huge problems,” Ueberroth referring to the 1972 Games in Munich (terrorism), 1976 Olympics in Montreal (financial problems) and the 1980 Games in Moscow (the U.S.-led boycott). “We were a turning point for the Olympic movement and re-establishing that it could be viable. That was the 30,000 volunteers we had, our 20,000 employees that did that.”

The International Olympic Committee finds itself once again in a state of crisis. Budapest last week became the eighth city to withdraw its bid for the past two available Olympic Games. Still Ueberroth remains bullish on the Olympic movement.

“I think the Olympic movement is very healthy and it’s got two great cities bidding and they’re both terrific,” Ueberroth said referring to 2024 Games bid candidates Los Angeles and Paris. “I obviously have my favorite, but I’m not involved nor should I be.”

Ueberroth has known LA 2024 chairman Casey Wasserman since Wasserman was a young boy. Wasserman’s grandfather, Lew Wasserman, the Hollywood executive, was part of a group of wise men that also included political power broker Paul Ziffren, lawyer and businessman John Argue and Los Angeles Mayor Tom Bradley that Ueberroth frequently turned to in the years leading up to the 1984 Games.

“I would talk to Lew about something and he would say ‘don’t worry about that. That’s not going to be a problem a week from now,’” Ueberroth said.

But Ueberroth has resisted playing a similar role to the younger Wasserman.

“He’s not asking me for any advice and we chat but he’s got a great group,” Ueberroth said. “(LA 2024 chief executive) Gene Sykes is fantastic, is a very skilled executive. So I think this team is best I’ve seen. The U.S. has a good chance because of the people they’ve put together.”

Ueberroth once told the Register, “I don’t have the skill to live in the past.”

“I don’t have the clock,” Ueberroth said. “The look-back clock is not very strong in my small brain. I live in the present and the future, and I’m excited and activated by what’s going on today, tomorrow.”

The thing about lifetime achievement awards is they force you to at least slow down long enough to glance in your rearview mirror even if at 79 you’re still in a hurry to find out what’s around the next corner.

The other day Ueberroth told how San Jose State water polo coach Ed Rudloff changed the life of an undersized high school player by offering him a scholarship in a sport he was only vaguely aware of.

“Without that I wouldn’t have gone to college,” Ueberroth said.

In a way Ueberroth returned the favor a quarter-century later, helping change the course of the lives of thousands of Olympians and millions more. The 1984 Games produced a $225 million surplus. Forty percent went to the USOC Endowment Fund and continues to subsidize American Olympians. Another $93 million was used to create the LA ’84 Foundation, which through Ueberroth’s vision and Anita DeFrantz’s leadership benefited more than 3 million young athletes and 1,100 sports organizations in the Southern California region. All of which gives a new definition, a special meaning to the term lifetime achievement award.

“There’s thousands of young people that has been provided a new path to their lives,” Ueberroth said. “A new path to education, a new path to participation as citizens.”

New paths created by a man who has spent a lifetime charting them.