Pelicans running out of time to adjust to DeMarcus Cousins' presence

DALLAS -- Anthony Davis couldn't fall asleep Sunday night after receiving an All-Star Game MVP award and an All-Star teammate before leaving the Smoothie King Center. He was too busy dreaming about the possibilities of playing next to DeMarcus Cousins."I... 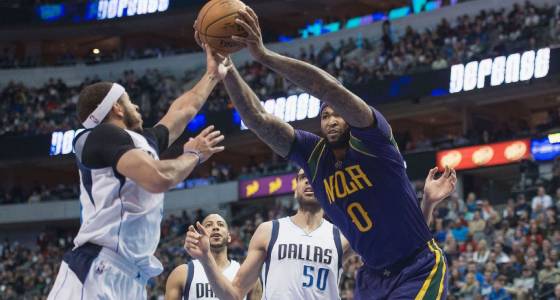 DALLAS -- Anthony Davis couldn't fall asleep Sunday night after receiving an All-Star Game MVP award and an All-Star teammate before leaving the Smoothie King Center. He was too busy dreaming about the possibilities of playing next to DeMarcus Cousins.

"I was just up all night just thinking about how far we can go, what we can do on the court together," Davis said.

"And so we were just texting back and forth about the team. We're both excited for the rest of the season, and then next year, and whatever happens after that. But we just want to go out there and win."

The first chapter of "Fire and Ice" was far from the wild fantasies conjured up about pairing together two of the most skilled big men in the NBA, with the Houston Rockets coasting to a 30-point win against the reshuffled New Orleans Pelicans. But the first quarter in their second attempt came the closest yet to any visions of grandeur.

New Orleans made its first five shots from the floor against the Dallas Mavericks, and the new big three of Cousins, Davis and Jrue Holiday scored 28 of their team's 30 points. Less than two minutes into the quarter, Cousins and Davis executed a 5-4 pick-and-roll that led to the former hitting the latter for an alley-oop lay-in over a help defender that also sent Davis to the free-throw line.

Then the Pelicans encountered the caveat priced into the dream of a roster that relies so heavily on three players.

The newest big three indeed flashed its great potential, combining for 69 points, 36 rebounds and all five of the Pelicans' made 3-pointers. But with Omri Casspi no longer on the roster, E'Twaun Moore absent and the bulk of their wing depth now in Sacramento, a supporting cast of 10-day contracts and holdovers combined to shoot 28 percent from the field and 0 percent from 3 as the Mavericks flipped the new-look Pelicans' coming-out party into a 96-83 win.

"This is basically a brand-new team now," Cousins said. "The identity is changing. It's going to have to change. It's going to be a work in progress."

Gentry said the roster overhaul wasn't to blame for a second straight game of 20 turnovers, but he and other players agreed it was the most telling statistic on the box score yet again.

"We had a tendency to, when we make a mistake, instead of trying to find a way to stop the bleeding, we kind of let it pile up," Cousins said. "And it kind of has a snowball effect. When we hit these dead spots, we've just got to find a way to come together and realize the situation we're in. Just deal with the situation right away, instead of letting smaller problems becomes bigger throughout the games."

Cousins also received a third foul on a charge call early in the second quarter after weaving up the court on a one-man fast break. Davis effectively reverted back to his pre-Cousins form, finishing the first half with 27 points on 22 shots and the night with 39 points on 34 shots.

But Gentry said the absence of his new star big man threw off their rotations -- including forcing Davis to log 39 minutes -- and Cousins struggled to work his way back in from there. Cousins still ended up with 12 points, 15 rebounds and six assists -- a line that underlines the rare subtitles in the 6-foot-11, 270-pound center's game -- but took just nine shots, 10 fewer than his debut in New Orleans.

"I wasn't as aggressive as I should have been after I committed the third one," Cousins said. "My teammates and coaches were talking to me. I just didn't respond the way I should have. I believe I became a lot more passive after that, and I can't play that way."

Such struggles are to be expected. Four of the nine players the Pelicans used Saturday were not with the team before the All-Star break. Two weren't even with them in the first game after the break.

"Of course I want to incorporate everybody into our system. Of course they're new," Davis said. "We try to run plays that we just went over yesterday. So it's tough. Sometimes they're coming from different organizations. DeMarcus has probably been running the same plays for eight years in the league.

"And now here, on the fly, he's got to change it up. I just try to talk to him when we call a play. 'DeMarcus, you're here,' or 'Reggie [Williams], you're here.' Whatever. Just try to tell them what to do on the fly. If it doesn't work, we just have to play basketball. Just play and go out there and have fun. When you're having fun, most of the time it will end up good for you."

But with 23 games left to play, the Pelicans are now staring up at four teams -- including the Mavericks -- in the chase of the eighth and final seed in the Western Conference, and burdened by the unenviable task of figuring out issues most big-three teams usually get a season to solve.

"We don't have the luxury of being a little bit better," Gentry said. "It's got to be quickly. It's got to be something that happens right away."

Cousins, for his part, said he didn't feel pressured to make things work immediately because of the expected learning curve that comes with such a major change.

"It's been tough the past two games," Cousins said. "Guys are a little frustrated. But I believe the frustration [means] our hearts and our intentions are in the right place. We want to get these things right. We want to correct these mistakes. We want to get our chemistry going."

Indeed, the Pelicans, now boasting one of the rarest and most dynamic frontcourts in history, can and should dream big. But they must simultaneously weigh the realities presented by an accelerated timeline.

"We showed signs, again, of what we could be," Davis said. "But one quarter or 20 minutes is not going to cut it."