Here's our weekly look at the fortunes of some of the game's brightest young stars -- including the remarkable rookie duo leading this year's Calder Trophy chase.Patrik Laine, RW, Winnipeg JetsHow great is this year's rookie race? It looks like it will... 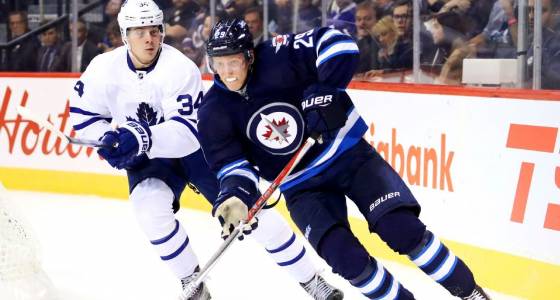 Here's our weekly look at the fortunes of some of the game's brightest young stars -- including the remarkable rookie duo leading this year's Calder Trophy chase.

How great is this year's rookie race? It looks like it will go down to the wire. Laine has been on fire of late, with seven goals and three assists in his past five games. And all of those points were collected at even strength, as the Jets try to stay in the hunt for a wild-card berth in the Western Conference. Laine, who is still only 18, leads all rookies with 54 points and is second in the league overall with 30 goals -- trailing only the Pittsburgh Penguins' Sidney Crosby, who has 33.

Did we mention that Laine has Calder Trophy competition? Matthews, 19, is continuing his superlative inaugural NHL season, collecting 13 points in his past 11 games -- which included a big overtime win over Laine and the Jets in Toronto on Tuesday and a strong showing in a shootout loss to the New York Rangers. The Leafs continue to hang onto a playoff spot in the Eastern Conference, and Matthews, the first overall pick in the 2016 draft, remains a key part of Toronto's playoff hopes. His 28 goals are tied for fourth in the NHL, and his 52 points are second best among all rookie skaters -- behind the aforementioned Laine.

One of the reasons the Sabres are making life difficult for Buffalo GM Terry Murray heading into the trade deadline is that they're suddenly playing their best hockey of the season and are within hailing distance of the playoffs. Ristolainen, 22, continues to be a workhorse on the Buffalo blue line, averaging a team-high 26:58 a night in ice time, fourth among all NHLers. In his past 10 games, the eighth overall pick in the 2013 draft has collected eight points (a goal and seven assists), including three power-play helpers. He is on a five-game point streak.

It's been an interesting year for the young man known as Johnny Hockey. He was a star for Team North America at the World Cup of Hockey before he and the Flames staggered out of the gate in the regular season. Calgary has clawed its way back into a playoff berth in recent weeks, but Gaudreau has struggled to match his goal production of a year ago, when he notched 30 during his sophomore season. The 23-year-old has just 11 goals this season and has scored once in his past 21 games. Ouch. That's not to say that Gaudreau, a hidden gem who as drafted 104th in 2011, isn't being productive. He has 10 assists in his past 10 games, including a four-assist night against the Nashville Predators. But it's obvious that the Flames need Gaudreau to start finding the back of the net again if they're going to make any noise in the playoffs.

Another big clash between dazzling budding superstars Auston Matthews and Patrik Laine got us thinking: Which player would be better to build a team around? Our writers were almost unanimous.

Blue Jackets rookie Zach Werenski plays hockey with a football mindset and uses his intellect to find open receivers. Is the unheralded University of Michigan product the Tom Brady of the NHL?

With his amazing goal against the Carolina Hurricanes on Sunday, rookie sensation Auston Matthews is making the Calder race interesting and giving his Toronto Maple Leafs postseason hopes.

Toffoli is one of a several Los Angeles players who have missed significant time because of injury this season. And since he returned to the lineup in early February, it's been a bit of a struggle for the 24-year-old, who scored 31 times last season and was a key part of the Kings' Stanley Cup run in 2014. Toffoli has two goals and zero assists in his past nine games for a Los Angeles squad that finds itself outside the playoff bubble in large part because its offense has been so anemic for much of the season. (The Kings rank 24th in goals per game.)

The big sell-off in Carolina has begun, with the trade of veteran defenseman Ron Hainsey to Pittsburgh on Thursday. Simply put, the Hurricanes -- who are poised to miss the playoffs for the eighth consecutive year -- aren't ready for prime time yet. Yet being the operative word. But Teravainen, the 22-year-old skilled winger whom Carolina picked up before the season from Chicago, shows that you can't hurry maturity. The 18th overall pick in 2012, who won a Cup with Chicago in 2015, has just two goals in his past 22 games and zero points in his past five games. Like so many of the Canes' young core, Teravainen still has a steep learning curve ahead of him.

The Penguins and Flyers will head outdoors for this matchup of longtime, in-state rivals at the lone Stadium Series game on the NHL slate this season. Murray doesn't get the love he deserves in terms of the Calder Trophy discussion (see above) -- in large part because he has already won a Stanley Cup. But he's been terrific during his first full season in the NHL, with a 22-7-3 record and a .926 save percentage. As for Provorov, the 20-year-old has continued to impress even as other young Flyers like Shayne Gostisbehere and Travis Konecny have faltered. Only once in his past 12 games has Provorov played fewer than 20 minutes, and he's topped the 24-minute mark five times over that period.