For most of this season, when you looked up "dysfunction" in the dictionary, the Florida Panthers logo popped up.An offseason of internal upheaval that saw longtime personnel and scouting staff (among others) dismissed, along with a shuffling of management... 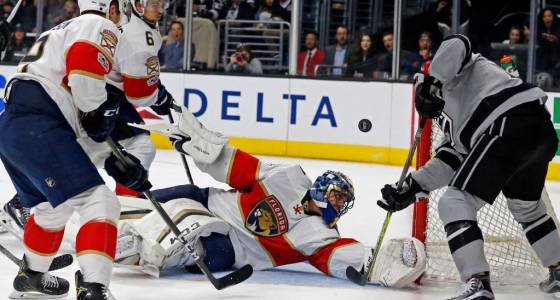 For most of this season, when you looked up "dysfunction" in the dictionary, the Florida Panthers logo popped up.

An offseason of internal upheaval that saw longtime personnel and scouting staff (among others) dismissed, along with a shuffling of management responsibilities, was followed by injuries to key players and an unpopular coaching change when Gerard Gallant was fired a few months after being named a finalist for coach of the year.

The team was flayed publicly. And so, on the ice, last year's run to the Atlantic Division crown looked like a mirage. So much for traction for a team more often linked to relocation talk than playoff success.

But a funny thing has happened on the way to the March 1 trade deadline: The Panthers got healthy. And then they got good.

After knocking off the St. Louis Blues 2-1 on Monday night to complete an unprecedented 5-0-0 road trip that also featured wins in Nashville, San Jose, Anaheim and Los Angeles, the Panthers are in fourth place in the Atlantic Division. They are six points behind the slumping first-place Montreal Canadiens, with two games in hand.

And so a team that a month ago appeared to be a seller before the trade deadline is suddenly pushing its chips toward the buyer's side of the table.

"This is the first four or five games all season where we've had a full roster," president of hockey operations Dale Tallon said. "The good news is we kept ourselves in the hunt. Guys are starting to believe in each other."

None of this should come as a surprise.

Getting Jonathan Huberdeau and Aleksander Barkov back in the lineup -- after both missed considerable time with injury -- changes everything.

Vincent Trocheck was forced into a No. 1 center role because of the injuries and played more than 20 minutes per night against opponents' top offensive units. With Barkov back, Trocheck has returned to a more comfortable role as a second-line center, having seen his game grow with the increased responsibility heaped on him.

"He really stepped up," Tallon said. "He's become a really complete player in a short period of time."

The return of Huberdeau and Barkov -- who is often compared to Frank J. Selke Trophy winner Anze Kopitar of the Los Angeles Kings -- has also been a boon for the ageless Jaromir Jagr, as his two linemates allow Jagr to play to his strengths without overextending himself.

"Huberdeau and Barkov are like [Jonathan] Toews and [Patrick] Kane being in or out," one longtime Eastern Conference executive said. "It picks the group up with that kind of skill returning."

The Panthers are 8-1 in their last nine games, during which they have scored 35 goals; they still give up too many goals, though, having allowed 26, and the power play is still sputtering, having delivered just four goals on 29 attempts in that same span. So don't be surprised to see the Panthers dip into the trade market to find defensive depth and maybe a top-nine forward with good offensive skills to add punch to the power play.

Last season, the Panthers added defenseman Jakub Kindl, and forwards Jiri Hudler and Teddy Purcell at the deadline, and while those players helped secure the division title, they were not particularly productive in the first-round playoff loss to the New York Islanders.

Tallon, who is the one fielding the trade calls after uncertainty over his role through the first part of the season, said he won't trade away young roster players. But he is willing to move prospects and draft picks.

The Panthers have four home games before March 1, including a date with the second-place Ottawa Senators, which will clear up what Tallon needs to do by the deadline. But history has shown the veteran team builder won't shy away from making moves. And although ownership has been criticized for its handling of team personnel and, specifically, for firing Gallant and installing GM Tom Rowe as interim head coach, it has shown a willingness to spend money.

The team's recent stretch of strong play will mean nothing if it cannot follow it up with consistent play down the stretch, but it is poised to qualify for the playoffs for a second straight season. If that happens, it would be the first time the Panthers have made the playoffs two years in a row since 1996 and '97, and only the second time in team history.

Defensemen are in demand as the trade deadline approaches. Pierre LeBrun plays matchmaker and pairs up six blueliners -- including Philadelphia's Mark Streit -- with a deserving suitor.

"If they stay healthy, I like their chances to get in," said a former NHL player and longtime scout and coach, who believes the Panthers could use center and defensive depth to get there.

Who knows, maybe a season that looked grim will become the kind of learning experience that pays dividends come crunch time.

"Now these guys have been mentally challenged as young players, and I think that helps them," said longtime Panther Bill Lindsay, now a TV analyst for the team. "I think you've got to go through some adversity as a team and as a player to grow."

He pointed to defenseman Aaron Ekblad who, along with points leader Trocheck, is a key part of the roster. Both have had to work through personal challenges this season. This might have been the first time Ekblad, the 2015 rookie of the year, has faced adversity, Lindsay said, and while it hasn't been pretty at times, he's starting to come around while learning lessons about consistency.

"I think you've got to learn as a younger player in this league how incredibly hard it is to be a consistent year to year," Lindsay said. "Not only that, day to day, shift to shift. To be a pro in this league is extremely demanding."

Now we'll see how much better the Panthers can be as the trade deadline approaches.