Famagusta 16°
overcast clouds
BUSINESS EDUCATION ENTERTAINMENT HEALTH POLITICS SCIENCE SPORTS TECHNOLOGY
10:22 Four Benefits of Hiring a Dedicated Development Team
04:48 Mark Kelly, President of Safety Marking Inc., Discusses Structuring Effective...
17:58 Trump wants to play golf at the Biden swearing-in in Scotland - but is...
17:54 First doubts Regarding tightened Steps: two National Countries Extract...
10:39 Covid-19 : in France, the end of containment and entry into force of the...
04:34 The schools of Rome will use the Internet with light bulbs: what it is...
10:58 Kratom Tea: How Is It?
11:46 Office Furniture Products for you!
12:17 Top Clubs, Their Value, Revenue And Current Standings
11:14 Reasons Why Rewarding Yourself is a Good Practice
BIST
1542
GOLD
442.851
USD
7.3873
GPB
10.1025
EUR
8.9765
Breaking News
Online Etiquette Rules for Managing a Virtual Business
Close

Bryant Graeber didn’t have many friends growing up. Middle school students aren’t always so accepting of kids who are different.And Graeber, born with a rare metabolic disorder that causes buildup of sugar in his organs, was different.“People just kind... 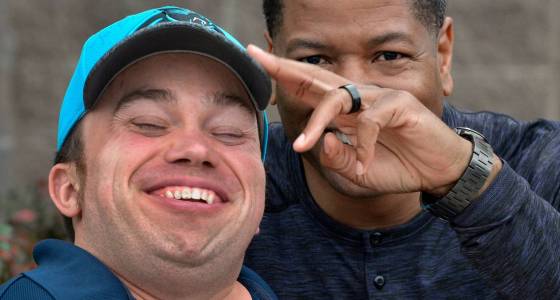 Bryant Graeber didn’t have many friends growing up. Middle school students aren’t always so accepting of kids who are different.

And Graeber, born with a rare metabolic disorder that causes buildup of sugar in his organs, was different.

“People just kind of treated me differently because I have a big head, back brace and that kind of stuff,” Graeber said.

But weeks after graduating from Myers Park High in 2003, Graeber started a job that changed his life – and touched the lives of the hundreds of people he greets every day at the entrance to the Harris YMCA in SouthPark.

A huge sports fan, Graeber, 32, is often dressed in the gear of his favorite teams – and says he’s “crazy” about the Carolina Panthers.

Three years ago, the Y honored Bryant with a celebration after he greeted what officials estimated was his one millionth visitor. The majority of those people likely know Bryant by name.

“I had some friends, but not a lot,” he said. “They didn’t really treat me well. Now, ever since I’ve been at the Y, I feel like I have a lot more friends than I ever did growing up.”

One of those friends, Steve Wilks, is the Carolina Panthers’ new defensive coordinator – although Graeber didn’t know that at first.

Graeber was in first grade when he was diagnosed with MPS1, a type of lysosomal storage disease.

MPS1, also referred to as Hurler-Scheie or Scheie syndrome, and related diseases occur in one in 25,000 births. They can result in mental retardation, short stature, joint stiffness, speech and hearing impairment and a shortened life span, among other problems, according to the National MPS Society.

Graber has been a fixture at the Harris Y since he began a part-time job 14 years ago welcoming members as they entered the swimming pool. But when the pool closed at the end of the summer, Graeber shifted to his current position as greeter at one of the country’s busiest YMCAs.

“He is the first face folks meet when they come to the Y,” Marco Molenaar, member services director at the Harris Y, said. “He kind of takes off the edge maybe for people who aren’t sure what they want.

“But if you meet Bryant you’re like, ‘This is a wonderful place to be.’”

Some members have brought him gifts. A local woman ran a marathon in his honor.

Almost everyone speaks to him, with some giving him a “War Eagle” – a salute to his beloved Auburn Tigers – as they enter the Y.

Wilks, who played football at West Charlotte and Appalachian State, was hired as the Panthers’ secondary coach. He and his family had bought a home in south Charlotte, not far from the Harris Y. Wilks, 47, works out there early most mornings before heading to Bank of America Stadium. And he isn’t big on chatting at the gym.

But when Wilks would leave the Y, he would notice Graeber, holding the door and speaking to everyone as they passed by.

“He has a smile on his face every day, greeting everybody and just trying to be so nice and polite,” Wilks said. “I just enjoy having conversations with him.”

Their relationship grew from there.

Despite being a sports nut, Graeber didn’t realize initially that Wilks was a Panthers coach.

Graeber roots for Auburn, where his sister went to school, during football season, and is fan of North Carolina’s basketball team. He also pulls for the Charlotte Hornets and the Atlanta Braves.

But he’s wild about the Panthers.

“I used to see him all the time, just greeting everybody coming in and out. And then I started seeing him wearing Panthers gear quite a bit,” Wilks said. “I said, ‘You know what, I’m going to bring him a hat and a T-shirt.’ I did that and we just started conversating. We started building a relationship and a friendship from there.”

And Graeber discovered his friend was more than just a fan of the Panthers. He was an assistant coach.

“I had no idea when I first met him,” Graeber said. “I thought he was a crazy fan like me.”

Wilks hosted Graeber and his mother, Melissa Bryant, at a practice before the 2015 season. Several players signed Graeber’s hat. Quarterback Cam Newton – Graeber’s favorite player because of his Auburn ties – posed for a picture with him.

Graeber had the photo blown up and framed, and it hangs above his bed in his apartment off Providence Road.

Lots of athletes and celebrities have signed items for Graeber. Dozens of people stop and talk to him everyday at the Y.

But few have gone beyond that to see how Graeber deals with his deadly disease. Wilks has.

When Graeber was 14, he joined nine other teenagers in a clinical trial at UCLA for enzyme replacement therapy, which received FDA approval several years later. The enzyme treatments are not a cure-all, but the weekly infusions help make the disease more manageable for Graeber.

Last summer Wilks stopped by the doctor’s office where every Thursday Graeber receives the therapy for nearly five hours through a slow-drip IV into a port in his chest.

Wilks spent about an hour with Graeber and learned a lot more about his condition and treatment.

“I just look at his situation and how much he’s persevered over the years and has really beaten the odds,” Wilks said. “Just to be able to see him and the smile on his face and just how joyous he is every day, it’s a blessing to us all.”

Graeber has met lots of athletes and coaches over the years – at the Y and at various games and events. His apartment would make any sports collector proud.

He has a UNC cap signed by Michael Jordan, a Panthers helmet autographed by Julius Peppers and a football signed by Cam and Ron Rivera. In the hallway is a framed program autographed by Muhammad Ali at a charity dinner in Charlotte years ago.

But the visit to the therapy session is among the reasons Graeber thinks the world of Wilks – “not because he’s a coach, but because of the way he treated me.”

On Graeber’s kitchen table is the Observer sports section from Jan. 14, which featured an article on Wilks and his promotion to defensive coordinator. Graeber doesn’t mention getting Wilks to sign it or having it framed; he’s just proud of his friend.

Blake Graeber, an insurance broker in Charlotte, appreciates the time Wilks has spent with his son.

“As busy as he is and as much as he has going on in his life, to take time to make the effort to give back to a young man who’s had a tough time physically, you just thank God for people like him,” Blake Graeber said. “He’s a blessing.”

Bryant and Wilks got together this week for a picture at the Y.

The two sat side-by-side on a bench outside the main entrance, with Wilks jokingly telling Graeber not "to make me look small with those big shoulders you've got."

As their photo shoot wrapped and Wilks prepared to return to the stadium, Graeber had a question about the Panthers’ prospects for 2017.

“What’s going to happen this year, you think?” Graeber asked. “Are we going to make the playoffs? We did the last time I went (to a practice).”

“You know what? I think you’re probably the reason we did make it,” Wilks said, smiling. “That’s what it was. You’re the lucky charm.”

Graeber laughed, then explained what makes his relationship with Wilks so special.

“I’ve always treated him like he likes to be treated,” he said. “And he treats me how I like to be treated. And that’s why we’re good friends.”