CaptionClosePalm Beach Gardens, Fla.Ryan Palmer has reason to believe that better days are ahead, with his golf game and at home.Palmer made seven birdies Friday on another day of ideal scoring conditions at PGA National for a 5-under 65 that gave him a share... 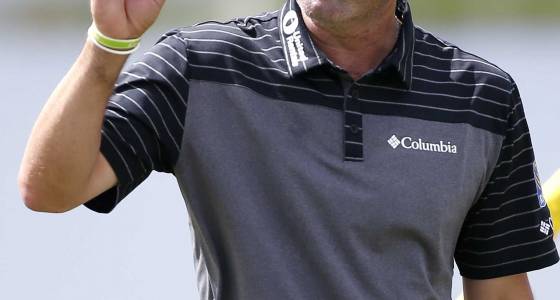 Ryan Palmer has reason to believe that better days are ahead, with his golf game and at home.

Palmer made seven birdies Friday on another day of ideal scoring conditions at PGA National for a 5-under 65 that gave him a share of the lead with PGA Tour rookie Wesley Bryan (67) going into the weekend at the Honda Classic.

Rickie Fowler was a shot back after his second 66, and Anirban Lahiri was another stroke behind after a 68.

Starting a new year packed with uncertainty over matters far more important than golf, Palmer returned from a four-month break and missed the cut in his first four events. He signed up for Riviera only because his game needed work, and he saw enough go right to find some momentum going into Florida.

The long break was to be at home with his wife, Jennifer, who is recovering from breast cancer.

She was diagnosed with Stage 2 cancer in late July while he was at the Canadian Open. She had surgery about five weeks later. Palmer's season ended in September, and he spent the rest of the year helping her cope with chemotherapy and at home with their two children.

European PGA: Paul Waring led by one shot after 12 holes of his second round when play was suspended for bad light at the Joburg Open. Organizers have been playing catch-up since rain led to a waterlogged course on Thursday, forcing 98 players to finish their first rounds on Friday morning in Johannesburg.