Manny Pacquiao will defend his welterweight title against Amir Khan on April 23, the two fighters tweeted Saturday.Negotiations between team Pacquiao and team Khan have come to terms for the April 23 bout as this is what the fans wanted. #PacquiaoKhan—... 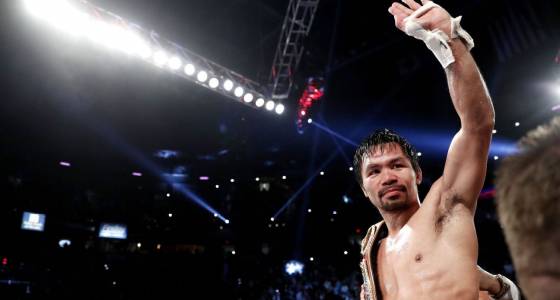 Negotiations between team Pacquiao and team Khan have come to terms for the April 23 bout as this is what the fans wanted. #PacquiaoKhan

Khan (31-4, 19 KOs) has been trying for the past few years to land a fight with either Pacquiao -- whom he knows very well and has sparred countless rounds with when they were both trained by Freddie Roach -- or Floyd Mayweather.

England's Khan, 30, has not fought since May, when he moved up two weight classes from welterweight and challenged then-middleweight world champion Canelo Alvarez at a catchweight of 155 pounds and was spectacularly knocked out cold in the sixth round.

Pacquaio, 38, previously had a deal to fight April 22 against Australia's Jeff Horn in Brisbane, but that fight appears to have been scuttled in favor of the Khan bout. Pacquiao said recently that his next bout will take place in the United Arab Emirates, though no announcement has been made about the location of the Khan fight.

In his most recent fight, Pacquiao outpointed Jessie Vargas to reclaim a welterweight world title in a dominant performance on Nov. 5 in Las Vegas. Pacquiao is boxing's only eight-division world titleholder.