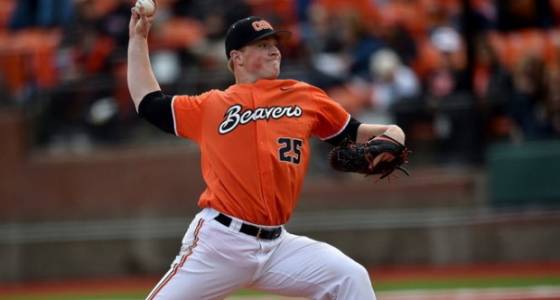 As the redshirt sophomore right-hander takes steps forward, Beavers pitching coach Nate Yeskie said he was encouraged by his progress but declined to say when Rasmussen could return for game action.

"He's getting closer," Yeskie said Tuesday. "I still am hesitant to put a timeframe on it just because I think that's unrealistic sometimes. He'll be ready to go when he's ready to go. But I know that his mind is out ahead of his body right now, and that's always a good thing."

Rasmussen was a freshman all-American in 2015, when he went 7-4 with a 2.80 earned run average, had 82 strikeouts and threw the first perfect game in Oregon State baseball history.

The Washington native began last season as OSU's No. 1 starter. He went 4-1 with a 3.41 ERA and 42 strikeouts before leaving a March 24 start at California with arm discomfort.

Yeskie said Rasmussen has been following doctor protocol for the length of each bullpen session and that the staff would be "diligent" building his endurance levels as he continues to develop his velocity and crispness of pitches.

"He's enjoying that hunt to get himself back between those white lines," Yeskie said. "And when he does, I think we'll see some good things."

Recovery time from Tommy John surgery can vary, sometimes taking up to 18 months.