Oregon State saw its five-game win streak to open the season snapped Friday in Surprise, Arizona. The Beavers lost to Ohio State 6-1 in their second game of the Big Ten-Pac-12 College Baseball Challenge. Read below to see the recap provided by Oregon State.... 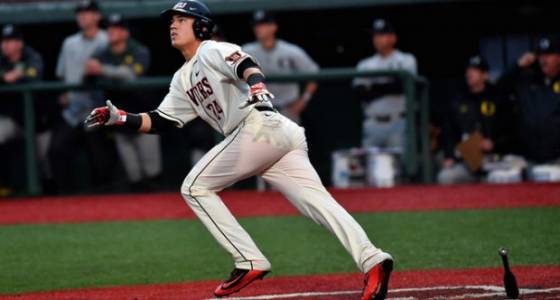 Oregon State saw its five-game win streak to open the season snapped Friday in Surprise, Arizona. The Beavers lost to Ohio State 6-1 in their second game of the Big Ten-Pac-12 College Baseball Challenge.

Read below to see the recap provided by Oregon State.

SURPRISE, Ariz. - The seventh-ranked Oregon State baseball lost to Ohio State, 6-1, Friday afternoon at Surprise Stadium in a game that was a part of the Big Ten-Pac-12 College Baseball Challenge.

Michael Gretler drove a double to left in the seventh to get the Beavers on the board, driving in Elliott Cary from first after he had singled. The RBI double chipped away at was a 4-0 Ohio State lead at the time. Oregon State, however, was unable to get Gretler home from second, and the Buckeyes tacked on a pair of runs in the ninth inning for the 6-1 final.

Bryce Fehmel started for the Beavers and allowed seven hits and three runs in five innings. He took the loss to drop to 1-1 on the year.

The Oregon State (5-1 overall) offense was handcuffed by Ohio State (3-3) starter Yianni Pavlopoulos, who allowed three hits and no runs in six innings. He struck out four and walked three to earn the win, pushing him to a 1-0 mark this season.

Ohio State took an early 1-0 lead in the first, then pushed its advantage to 3-0 with a two-run home run off the bat of Brady Cherry in the fifth.

Donahue Extends Streak
Junior Christian Donahue has hit safely in all six games this season after going 1-for-3 in the loss. He doubled unconventionally in the first, chopping a ground ball to first. The ball, however, hit the first base bag and bounced over the head of Ohio State first baseman Bo Coolen.

6-To-1
The Oregon State staff allowed 13 hits in the loss, but kept its early season strikeout-to-walk ratio intact. Bryce Fehmel, Tommy Paul and Brandon Eisert combined to strike out six and walk just one. Oregon State pitchers have struck out 49 and issued just 15 walks in 54 innings this season.

Up Next
The Beavers return to Surprise Stadium Saturday when taking on Nebraska at 3 p.m. PT - 4 p.m. in Arizona. The game will follow the first Spring Training game of the season between Kansas City and Texas.

Oregon State baseball has started the season 5-0 and has three more games left in the desert before returning to the Pacific Northwest.

The Beavers play Ohio State on Friday in Surprise, Arizona in their second game of the Big Ten-Pac-12 Challenge. OSU beat Nebraska 10-1 on Thursday in the first game of the challenge.

Since the game will not be televised, you can check the comments section below for live updates from the matchup. For stats, go to the live stats link on the Oregon State baseball schedule page. You can stream the radio broadcast at osubeavers.com.