SURPRISE, Ariz. - Jake Thompson allowed just two hits over a career-long eight innings to send the Oregon State baseball team to a 5-1 win over Ohio State Sunday morning at Surprise Stadium. The victory sent Oregon State to a 7-1 mark this year, with... 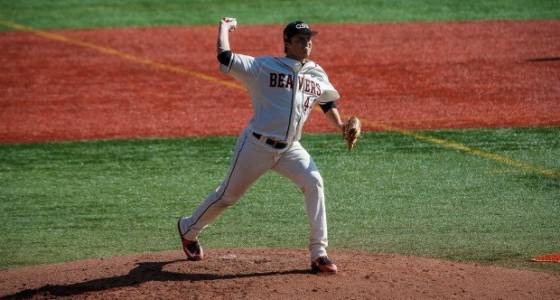 The victory sent Oregon State to a 7-1 mark this year, with all eight games coming over a near two-week stretch at the Spring Training home of both the Kansas City Royals and Texas Rangers. The Beavers now return to Corvallis Friday for the 2017 home opener against UC Davis, a 5:35 p.m. PT start at Goss Stadium at Coleman Field.

Thompson was sharp in his third outing of the season Sunday. The redshirt junior held the Buckeyes to two hits - a bunt single in the third and a solo home run by Tre' Gantt in the eighth. Thompson, who earned his third win of the season, struck out six and walked three.

The Beavers, held hitless the first three innings, scored three in the fourth to get ahead for good. KJ Harrison recorded Oregon State's first hit of the game, and later scored when Adley Rutschman chopped a single over the first baseman's head.

Michael Gretler, with his first hit of the day, drove in the game's second run with a double down the left field line. A batter later, Cadyn Grenier, grounded to short but reached on an error, enabling Rutschman to come in from third.

The Beavers added solo runs in the sixth and eighth innings. Christian Donahue drove in the game's fourth run on a sacrifice fly in the sixth, then watched as Andy Atwood drove in his second run of the season on a double in the eighth.

Gretler and Atwood each finished with two hits to lead the team, which had seven off four Ohio State pitchers.

Ohio State (3-5) starter Jake Post was saddled with the loss after allowing four hits and three runs in four innings. He dropped to 0-1 on the year.

Cary's Catch
Elliott Cary made a "web-gem" type catch to rob Brady Cherry from sure extra bases in the fourth. Cary, playing center, ranged to the fence and made a leaping catch at the wall. Both teams were unaware if he caught it, but the second base made umpire made the ruling when Cary was able to show him the ball.

Thompson's Trip
Jake Thompson went 3-0 during the Beavers' eight-game trip to Surprise. The redshirt junior, over three appearances - two starts - struck out 15 in 13 2/3 innings. He allowed five hits and two runs for an ERA of 1.32.

Last Two
Michael Gretler posted a second consecutive two-hit day in the win over Ohio State. The junior is 4-for-8 with two RBI over his past two games.

End Of The Trip
The Oregon State pitching staff will leave the state of Arizona with a 1.50 earned run average over 70 innings. The staff struck out 66 and walked only 22 while holding opponents to a .207 batting average. Opponents scored just 16 runs - 12 earned - in the eight games. Offensively, Oregon State leaves the state with a .270 average, collecting 12 doubles, three triples and three home runs. The Beavers have struck out 32 times while earning 27 walks. OSU is also 8-for-10 in stolen-base attempts, with Nick Madrigal's four leading the team.

Up Next
Oregon State returns to the state of Oregon to begin an eight-game homestand against UC Davis, Portland and Ball State, all at Goss Stadium at Coleman Field. UC Davis will be the Beavers' opponent in the 2017 home opener, Friday with a 5:35 p.m. PT start. The Beavers and Aggies will play a three-game series, continuing Saturday at 1:35 p.m. and finishing Sunday at 1:05 p.m.