STANFORD, Calif. -- Oregon's 75-73 victory over Stanford on Saturday was likely the least by-the-book win of the season for the Ducks.  A coach, one that wants to keep his sanity at least, likely doesn't draw up a win that features his team notching... 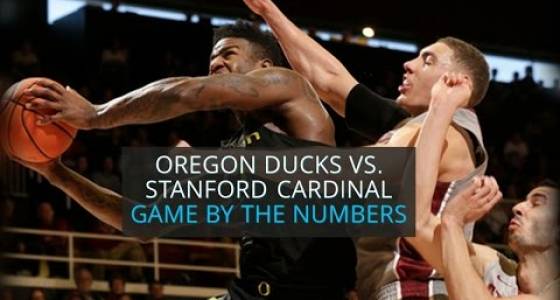 STANFORD, Calif. -- Oregon's 75-73 victory over Stanford on Saturday was likely the least by-the-book win of the season for the Ducks.

A coach, one that wants to keep his sanity at least, likely doesn't draw up a win that features his team notching just eight rebounds in the first half.

And in a perfect world, after catching Ennis' miss with a second left on the shot clock, Payton Pritchard's put-back attempt wouldn't have just hit rim.

But on one of the more bizarre final possessions of Oregon's season, all the things that didn't pan out added up to one thing: The Ducks' second Bay Area sweep since 1976.

Because even though Ennis air-balled the game-winner and Pritchard's put-back didn't fall, it all set up Jordan Bell to snag the rebound and tip it in with 14 seconds left to give the Ducks their second final-possession win this week.

Textbook, if you will.

"Just bat it to the basket and hope it goes in," Oregon coach Dana Altman said. "We got a good shot off, but it didn't go in and the guys effort to the basket was pretty good. We kept it alive and fortunately it went in."

It was one of the few plays on Saturday that Altman was pleased with. Despite shooting 51 percent and turning the ball over only eight times, the No. 6 Ducks let the Cardinal (14-14, 6-10) hang around because of a mauling on the glass.

After the first half, the Cardinal had more offensive rebounds than the Ducks had total rebounds. The Cardinal thrived behind the effort of Reid Travis, who after missing Stanford's game against Oregon earlier in the year, scored 27 points and pulled down 14 rebounds.

The Ducks had 25 rebounds as a team.

"He killed us," Altman said. "He had an unbelievable game...it doesn't get much better than that. That was as good of a performance as we've seen all year."

The Ducks had control most of the game, but Stanford managed to hang around long enough to take a momentary lead on a Travis layup with 2:05. The team's traded points before Bell's go-ahead shot set up a final Stanford attempt in the dying seconds. Travis got the ball, Dillon Brooks and Ennis collapsed and popped the ball out. The game ended with Ennis laying on the floor with the ball in his arms.

Tyler Dorsey led the Ducks with 15 points and Brooks had 14 in the win.

The win doesn't happen, however, if the Ducks' final offensive possession didn't feature four offensive rebounds. The Ducks' halved their first-half effort in one possession, as Bell and Pritchard each grabbed a pair of offensive boards to set up the game-winner.

"That's us, man. That's something we have to work on," Ennis said. "We just weren't rebounding...We have to pride ourselves on that. We have such athletic guys, it's just boxing somebody out. We think we can just out-jump everybody."

Regardless, Oregon got the win to set up an eventful evening of television for the Ducks. The team planned on watching the much-hyped matchup featuring Arizona and UCLA -- the Pac-12's No. 1 and No. 3 teams -- before flying out of San Jose Saturday night.

A UCLA win would pull the Ducks into a tie for first-place with the Wildcats heading into Oregon's final game of the season, Saturday against Oregon State.

"Hopefully," Altman said, before pausing. "I hate to pull for UCLA. Isn't that against the rules?"