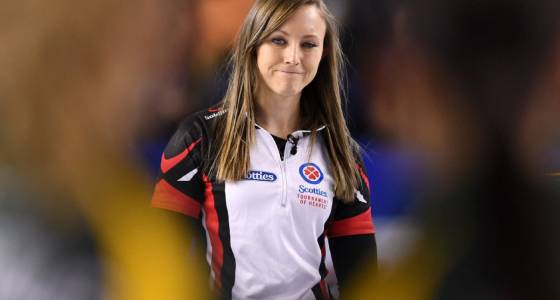 Manitoba downed Ontario 9-8 in Friday’s playoff between the top two seeds after a 9-5 victory over them to conclude the preliminary round Thursday.

So Englot needs a third straight win over Homan on Sunday to claim the Scotties Tournament of Hearts.

“A third time. It’ll be hard,” Englot acknowledged. “You know what? We need to focus on our game, play the same way, play aggressively and go from there and leave it all on the table.”

The winner represents Canada at next month’s world championship in Beijing.

A berth in December’s Olympic trials also goes to Englot should they win. Homan already has a trials berth.

They recruited Joanne Courtney at second when Alison Kreviazuk left the team following their second title.

“We’re hoping to be as best prepared as we can with that experience under our belt,” Homan said.

Homan’s team is ranked No. 1 in the world. They’ve built their team around winning the trials and representing Canada at next year’s Olympic Games.

“This is the exact spot we want to be in for more preparation for trials.”

A popular curling saying when it comes to expectations of Manitoba’s curling teams is “the buffalo is heavy” in reference to the crests on their backs.

Englot’s demeanour and performance has been anything but burdened. Cameron, Wilson and Westcott have taken their cue from a serene, rejuvenated Englot.

Englot skipped Saskatchewan seven times at the Hearts over three decades of competitive curling with her best results third in 1988 and 1989. Homan was born in 1989.

Englot, a Regina resident, was recruited to skip the team prior to this season.

The 53-year-old Englot has described their run to a provincial title and Sunday’s final as a ‘fairy tale.’ She would be the oldest skip to win a Tournament of Hearts in its 32-year history.

“I’d be pretty proud of that,” she said.

Prior to 1982, Alberta’s Hazel Jamison was also 53 when she won the Canadian Ladies Curling Association Championship in 1968.

The team that wins the Page playoff between the top two seeds has won the championship nine out of the last 15 times.

Manitoba and Ontario each went 10-1 in the round robin. Englot gets hammer as the higher seed to start Sunday’s final.

She exploited that advantage in their two previous games, taking 7-2 and 5-4 leads by the fifth ends, and then aggressively defending them.

“It doesn’t really matter what happened before,” Homan said. “Whoever comes out the strongest is going to win tomorrow.

“Whoever is on their game in that moment . . . they’re a strong team and I’d like to think we are too.”

McCarville beat 2016 champion Chelsea Carey of Calgary 8-1 in an earlier playoff game between the third and fourth seeds. They meet again for the bronze medal Sunday afternoon.