Onrait and O’Toole return to TSN in September | Toronto Star

TSN announced that Jay Onrait and Dan O’Toole will be returning to the perch that made them famous. As part of the network’s NHL trade deadline coverage Wednesday, Bob McKenzie made an announcement that the popular Canadian duo that was recently... 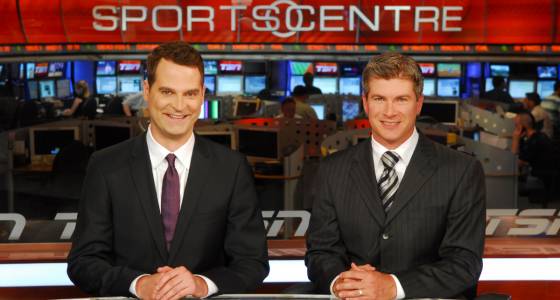 TSN announced that Jay Onrait and Dan O’Toole will be returning to the perch that made them famous.

As part of the network’s NHL trade deadline coverage Wednesday, Bob McKenzie made an announcement that the popular Canadian duo that was recently cut loose by Fox Sports 1 will be starting a new show called SC with Jay and Dan, in September, that will air at midnight and then loop through the morning.

TSN host James Duthie did have to say that it wasn’t a joke, and the pair appeared via satellite on the air, and talked about how excited they would be to rejoining the Canadian sports network, and once again, be anchoring highlights.

“We’re excited to be doing hockey again, it’s not as big down there,” joke Onrait.

“We’re excited to do highlights again, we haven’t done them in four years,” said O’Toole.

The pair moved to the U.S. to head up Fox Sports Live, which started off as a highlight show and had panels of athletes chatting about sports. Due to programming changes and FS1’s changing focus that emphasized debates between opinionated sportscasters, the show changed. Most recently, it was similar to a talk show but only with other Fox personalities as guests. As soon as news broke that they were free agents, rumours persisted that they would return to TSN.

It was a fun chat between Duthie and his former colleagues, who were joking through the segment that the host was filling in time, because there were no trades happening.

“We’re excited for people to watch us in the nude,” joke O’Toole, explaining that the TSN morning had many fans talking about going to sleep while they were on and waking up to the same telecast.

“You’re creepy as ever, and that’s what people love about you,” said Duthie. “The States never appreciated you.”