It's fashionable and fun to declare immediate victors after the first few days of NFL free agency. The formula usually goes like this: Teams "win" when they sign well-known players, especially if they set new benchmarks in contract terms, and they "lose"... 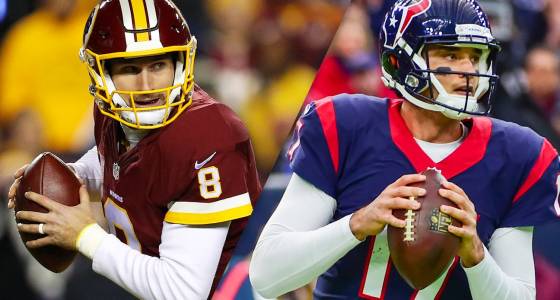 It's fashionable and fun to declare immediate victors after the first few days of NFL free agency. The formula usually goes like this: Teams "win" when they sign well-known players, especially if they set new benchmarks in contract terms, and they "lose" when they fail to address their needs with a well-known player who costs a ton of money.

Free agency begins on March 9, the start of the NFL's new league year. The deadline to franchise or transition tag a player is March 1. Here's more from ESPN.com:

A year later, of course, we have a much better idea of who made smart decisions. (Retrospect is the ultimate cheat code for sports analysis!) It shows us whose moves failed for reasons beyond their control and who might have stumbled into good moves. We can even see when a team was saved from flawed intentions.

So as we look ahead at the 2017 market, let's consider an updated review of five winners and losers from last season's frenzy.

The Giants blazed a relatively rare path: a team making tangible improvement on the strength of a free-agent spending spree. It's impossible to dispute the impact on their five-game turnaround from signing pass-rusher Olivier Vernon, defensive tackle Damon Harrison and cornerback Janoris Jenkins. The Giants' defense rose in Football Outsiders' annual DVOA (defense-adjusted value over average) rankings from No. 30 in 2015 to No. 2 in 2016. Along with improvement from safety Landon Collins, that was enough to lift the Giants into the playoffs. They fully guaranteed $90 million to those three free agents, and for at least one year, it paid actual dividends.

By remaining firm on a lowball offer, and then throwing for nearly 5,000 yards as the Redskins' franchise player, Cousins put himself in position to be the NFL's highest-paid quarterback whenever he signs a long-term contract. He can now sit back and know that all of the Redskins' options are favorable to him. They can pay him $23.94 million on the franchise tag in 2017 (and $34.5 million in 2018 if they choose). They can allow him to become a free agent, a rarity for an established quarterback because it would lead to a massive bidding war among quarterback-desperate teams. Or they could offer a monster deal to Cousins that matches the franchise structure. At the very least, Cousins seems to be in position to earn nearly $78 million in the three seasons from 2016 to 2018.

A couple of major hits helped the Falcons get over the hump and to Super Bowl LI. Quarterback Matt Ryan, receiver Julio Jones and coordinator Kyle Shanahan got most of the credit for raising the team's offensive DVOA to No. 1 in the NFL from No. 23 in 2015. But center Alex Mack (second-team All-Pro) played an equally significant role and was worth every penny of a five-year deal that fully guaranteed him $20 million. Meanwhile, Mohamed Sanu (59 receptions) was the Falcons' second-leading receiver and Taylor Gabriel (35 receptions, six touchdowns) was their fourth.

Roseman raised a few eyebrows when he traded up to draft quarterback Carson Wentz, even after he had re-signed Sam Bradford to a two-year deal (with $22 million in full guarantees) and also acquired backup Chase Daniel to a deal that fully guaranteed him $12 million. But Roseman was able to flip Bradford to the Minnesota Vikings, albeit as the result of Teddy Bridgewater's freak injury. As a consequence, the Eagles got out from under Bradford's contract and also recouped a 2017 first-round draft pick. All's well that ends well.

No matter who else was involved, the Raiders' 2016 free-agency foray would have been a winner for the simple inclusion of guard Kelechi Osemele. The Raiders paid dearly for him -- a five-year deal with $31.1 million in full guarantees -- but he helped transform the Raiders into a playoff team. Osemele's arrival turned a good offensive line into one of the NFL's best, an under-acknowledged part of quarterback Derek Carr's MVP-caliber season. Osemele earned first-team All-Pro honors as the Raiders recorded the NFL's second-lowest pressure rate (18.5 percent) while ranking No. 10 in yards per rush (4.43).

Put simply, the Brock Osweiler signing provided one of the worst outcomes in recent free-agent history. Osweiler's accuracy was brutal, resulting in the NFL's seventh-worst off-target percentage, and his average of 5.26 yards per dropback was the NFL's worst. No quarterback was less explosive on a per-pass basis, and the Texans benched him in Week 15. But he is guaranteed $16 million in 2017 whether he plays or not, making it difficult to extricate quickly from the mistake. Osweiler had shown some promise with the Denver Broncos in 2015. But in retrospect, it was in a small sample size (seven starts). Quarterback desperation might be the NFL's worst toxin.

Although the Browns accurately assessed their situation for 2016 -- they were not close to competing for the Super Bowl -- they might have underestimated the impact of flushing their roster as aggressively as they did. That was especially true at offensive line, where the decision to move on from Mack and tackle Mitchell Schwartz left them with a weak group that stunted any attempt to develop or evaluate quarterback prospects. Browns quarterbacks were sacked on an NFL-high 10.1 percent of their dropbacks. As a result, the Browns made no discernible progress as a franchise other than accumulating draft picks last season. Allowing receiver Gabriel to depart also seemed short-sighted after he turned into a productive playmaker for the Falcons.

The recent salary-cap surge has flooded the market with cash. Nearly $1 billion was available last spring, and that total will increase in 2017. The clear takeaway is that prominent free agents can get better deals on the open market, if they have the patience (and desire) to turn down their incumbent team's best offers. The best 2016 example was a pair of Broncos linemen. Before the market opened, Derek Wolfe signed a nice four-year deal with $12 million in full guarantees. Later, teammate Malik Jackson received a whopping six-year contract with $31.5 million in full guarantees from the Jacksonville Jaguars. They are not identical players, to be sure. And some players prefer familiar surroundings over top dollar. But there is little doubt where the best money can be found.

Fortunately, we get hindsight with which to judge the Packers' decision to part ways with cornerback Casey Hayward. It's true that Hayward had struggled to return to his 2012 form (six interceptions) over the following three seasons. But in the end, a cornerback with known ball skills signed a quite reasonable contract ($4.3 million fully guaranteed) with the then-San Diego Chargers -- and then went on to earn a spot in the Pro Bowl after intercepting an NFL-high seven passes. It wasn't a good look for the Packers, whose pass defense spent most of the season in dire need of depth and then was smoked (392 passing yards, four touchdowns) by the Falcons in the NFC Championship Game.

To be clear, the Jaguars signed some players with individual talents. Jackson produced 6.5 sacks. Cornerback Prince Amukamara and safety Tashaun Gipson are good players. But when you commit $58 million in full guarantees to a class, you expect immediate improvement. (The group also includes running back Chris Ivory.) Instead, the Jaguars fell back by two games and finished 3-13. Perhaps some of these players will contribute to a big leap in 2017 under new coach Doug Marrone. Until then, however, the Jaguars' 2016 class must be considered a flop.