This season has been full of accolades for Kevin Knox. The Tampa Catholic senior became the all-time leading scorer in Hillsborough County, surpassing former Plant City standout Russell Evans, who went on to start at Georgetown.1 Week Ago4 Days Ago3 Weeks... 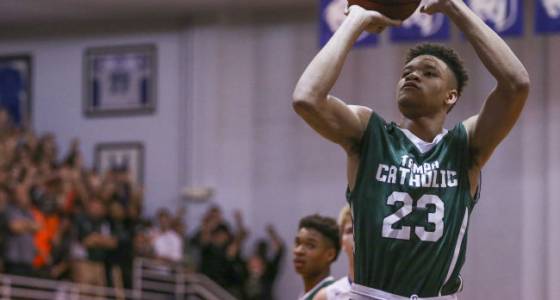 This season has been full of accolades for Kevin Knox. The Tampa Catholic senior became the all-time leading scorer in Hillsborough County, surpassing former Plant City standout Russell Evans, who went on to start at Georgetown.

Knox, a five-star recruit, was invited to participate in a high school slam dunk contest in Phoenix during the NBA all-star weekend. And he was selected to play in the McDonald's All-America game, the Jordan Brand Classic and the Nike Hoops Summit.

There also have been numerous recruiting trips for Knox, a 6-foot-8 forward who has narrowed his college choices to Duke, Florida State, Kentucky and North Carolina and will make his decision in mid-April.

But there was one thing missing from Knox's glittering high school resume: a state title.

Today, Knox and his teammates take the final steps toward winning what has been an elusive title when they face the Villages (30-2) in the Class 5A state semifinals at the Lakeland Center.

"This is what I wanted, to have that chance again," Knox said. "I knew we could have a really good year and a good shot at winning."

The Crusaders (25-5) have been to this stage before. They were in tears a year ago, locked in the misery of a crushing loss to Jacksonville Bolles in the state semifinals.

That defeat served as a powerful motivator for Tampa Catholic. Because of Knox's status as an elite prospect, the Crusaders were able to play a national schedule against some of the best teams in the country.

Despite that experience, Tampa Catholic struggled at times in the postseason. The Crusaders had to erase halftime deficits to beat Community School of Naples in the region semifinals and West Palm Beach Oxbridge Academy in the region final.

Knox scored just nine points against CSN, well below his season average of 28.7. He came back to score 26 against Oxbridge.

"I know one of the big factors for Kevin wanting to come back was to try and win a state title," Tampa Catholic coach Don Dziagwa said. "I'm trying to downplay that. I don't want him to start putting too much pressure on himself. Winning is certainly on his mind, but I also want him to enjoy the ride."

North Carolina coach Roy Williams is expected to attend today's state semifinal. Assistant coaches from Florida State are supposed to be there, too. That is nothing new. Knox has played in front of big-time coaches the past two seasons.

He and his teammates also have been in packed arenas.

They are hoping that experience pays off against the Villages, which is making its first final four appearance and does not have a senior in the starting lineup.

"It's possibly the last two games of my high school career," Knox said. "We already know what the environment is going to be like. I'm going to go out and play hard. So will my teammates.

"Hopefully we can win it all."