Bears general manager Ryan Pace said one of the things he liked about the team’s quarterback situation was the number of options available.One of those was potentially eliminated Wednesday morning as ESPN’s Adam Schefter reported the Patriots are not... 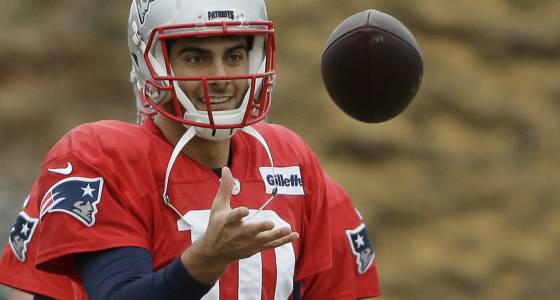 Bears general manager Ryan Pace said one of the things he liked about the team’s quarterback situation was the number of options available.

One of those was potentially eliminated Wednesday morning as ESPN’s Adam Schefter reported the Patriots are not expected to trade Jimmy Garoppolo, the Rolling Meadows High School and Eastern Illinois product.

Garoppolo started two games last season for the Super Bowl champion Patriots and is entering the final year of his rookie contract. There’s been speculation since last summer that Garoppolo would be traded to afford New England the opportunity to get a return on its investment of a 2014 second-round pick. The Patriots, of course, could franchise tag Garoppolo after this coming season and then look to trade him. It’s also possible offers the Patriots have fielded to this point don’t meet what they’re seeking.

The topic was a big talker during the week of Super Bowl LI with Garoppolo saying he was interested to see what was going to happen. Tom Brady has said he would like to play for several more years, but keeping Garoppolo gives coach Bill Belichick a player he is confident in as the Patriots look to defend their title with a 40-year-old starter.

Pace met with reporters and said no decision has been made with Jay Cutler, who has been the team’s starter the past eight seasons. Expectations are the Bears will move on from Cutler this offseason, but Pace maintained that keeping him is one of the many scenarios the team is sorting through.

"Jay is under contract, so it’s fluid," Pace said. "I would describe it as fluid. There are a lot of conversations going on between us and Bus Cook. I think one of the things with Jay, one of the things I value, is his agent Bus Cook. We’re close and at times like these that relationship is important because we can be honest and transparent.

"A lot has to play out. Obviously that is a hot topic and it should be. There are a lot of different scenarios right now and there are a lot of different things that could happen and it is fluid and it is fluid throughout this week and as we approach free agency and even after free agency. It’s our responsibility to have a plan in place, which we do, which is flexible and adaptable as the landscape is changing."

If the Patriots indeed keep Garoppolo, that means one more team will certainly be in need of a starter, and that could bode well for Cutler as well as veterans such as Colin Kaepernick and Mike Glennon.