PORT ST. LUCIE, Florida - Tim Tebow began spring training doing what he does as well as anyone. He stood in front of reporters and answered questions Monday, showing the affability and charisma that has made him an international superstar. He posed for pictures... 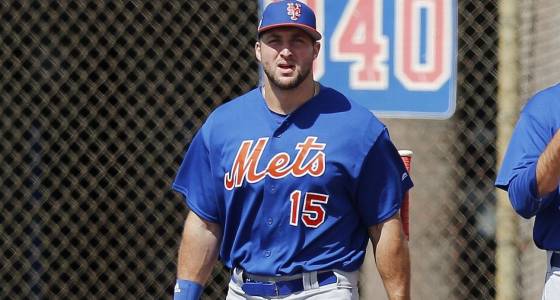 PORT ST. LUCIE, Florida - Tim Tebow began spring training doing what he does as well as anyone. He stood in front of reporters and answered questions Monday, showing the affability and charisma that has made him an international superstar. He posed for pictures and signed autographs for every single fan who came to see him on his first day at Mets camp.

Now the hard part begins for the former Heisman trophy winner who is attempting a professional baseball career at age 29.

Here are some of Tebow's quotes and highlights from Day One of the Mets' Tebow-palooza:

"I've put in the work, but [playing in the major leagues] is not just the ultimate goal ... Today's just the next day in that process."

On Monday, Tebow hit nine home runs in four rounds of batting practice, with each blast causing murmurs of excitement from the young Mets' prospects working out alongside him. His swing looked long, but he appeared to widen his base after a winter of work, which could give him better balance and allow him to foul off tough pitches.

"The ultimate goal is to enjoy it every day," Tebow said. "I can honestly sit here in front of every one of you and say I've had so much fun training, pursuing it, getting hits, striking out, whatever it's been."

Tebow's process began with tryouts for major league scouts last August, continued with a handful of at-bats in instructional league and then a stretch of games in the Arizona Fall League, where Tebow batted .194 and had trouble at times making contact. Given an offseason to adjust after his first taste of live pitching since high school, Tebow said he made minor changes to his swing, but did not overhaul it.

"We happen to be neighbors, so that helped. I baked a dish and brought it over. No, that's not true. That's a lie. We became friends. We both live in Jacksonville and had the Mets tie."

At least some of those swing changes can be chalked up to hours spent working with a new friend and neighbor who happened to get National League MVP votes following the 2016 season, Daniel Murphy.

We heard a lot about each other and had an opportunity to meet each other and become friends," Tebow said of his offseason training sessions. "We met at a place by our houses and trained a lot. It was just fun. I think he's kind of as much an addict of sports as I am. Even Thanksgiving morning, we were out there hitting before he had to get back to his wife and family"

Murphy told reporters Tebow needs repetitions, but has impressive power. The question, of course, is whether a 29-year old who figures to begin the season in the low levels of the minor leagues has enough time to learn the other facets of hitting in order to have a meaningful career.

"I always appreciate all the support of the fans who come out to cheer me on and are supportive. It always means a lot. I want to be able to make people happy, make people smile."

Monday's workout demonstrated again that all of those repetitions and any shows of power from Tim Tebow will take place in front of a sizable audience.

The crowd was nowhere near as large as it was for Tebow in instructional league, but it was noteworthy for a minor-league workout. After he took batting practice and shagged fly balls, he took time to sign autographs and pose for photographs for every fan who asked.

"If they come out to watch, I want to always give them something fun to see. At the same time, that's not the end goal," Tebow said. "I love to do it, but that's not the end goal. Things become very special that aren't easy, when you have to work for it. Meantime, I'm hopeful I can make some peoples' day and give them a hug or sign a couple of autographs, get a couple hits, obviously."

At several points, he ignored a Mets staff person who tried to wrap up the session so Tebow could retreat to the clubhouse for further baseball work.

Susan Colton is a retired elementary school principal and a graduate of the University of Florida. She drove 90 minutes from Pompano Beach to watch Tebow work out and to get a selfie and autograph and she got both. Among three dozen or so fans watching the workout, she was clutching Tebow's book and wearing a No. 15 Mets' shirsey she bought online.

No matter what the Mets say, having Tebow in the organization is a legitimate source of revenue and well worth the $100,000 bonus it took to sign him.

Already, Tebow jerseys were on sale in the team shop at First Data Field Monday. They were among the most prominently displayed and had a price tag of $120.

"Where'd that come from? Been holding onto that one for three years?"

Of course, those autograph-seeking crowds and hefty price tags for a jersey are as much a nod to Tebow's history as a quarterback to any signs of potential on the baseball diamond.

Tebow was asked by a New York newspaper reporter whether he felt he got a fair shot with the New York Jets, who released him after the 2012 season.

"You know, it's not for me to decide at all. I think one thing with Jets situation I learned so much from and am grateful for is that the highs, which weren't really many, and there were a lot of lows," Tebow said of his New York NFL stop. "It was not necessarily the most fun situation, but there were so many things I learned and try to improve in myself and the way I handle things. Everything happens for a reason. That situation happened for a reason."

With his first day behind him, Tebow will spend the rest of his spring working to make his baseball future -- and not his football past -- the focus as he looks to take his next step forward on the diamond.