One could forgive Denzel Valentine for his overexuberance.Not only had the rookie been handed a Get Out of Jail Free card with Doug McDermott's trade to the Thunder along with Taj Gibson, but then Valentine sank his first five 3-point attempts Friday night.... 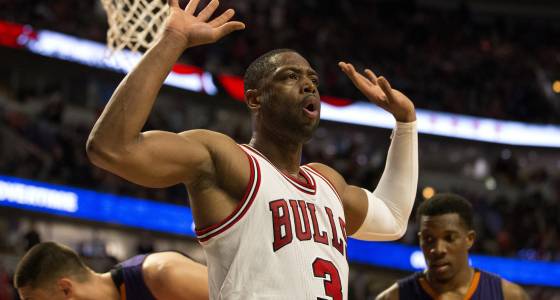 One could forgive Denzel Valentine for his overexuberance.

Not only had the rookie been handed a Get Out of Jail Free card with Doug McDermott's trade to the Thunder along with Taj Gibson, but then Valentine sank his first five 3-point attempts Friday night.

So when his sixth attempt fell woefully short, vividly illustrating the term "heat check," even Valentine had to laugh.

Nobody said this emphasis toward a youth movement would be pretty consistently, particularly when Dwyane Wade, back from missing three games with a sore wrist, suffered early foul trouble and Jimmy Butler endured a slow shooting start.

But those veteran mainstays awakened to make almost all the big plays late and enough youthful energy lifted the Bulls to a 128-121 overtime victory over the Western Conference cellar-dwelling Suns. Back at .500, the Bulls have won three straight.

The Bulls tied a franchise record with 20 points in overtime. Wade and Butler scored 17 of them.

"That's what great players do; they step up when you need the most," coach Fred Hoiberg said. "Jimmy had a tough night shooting through the first three quarters. But that's what he has been doing all year, taking over games in the fourth."

Wade finished with 23 points, including a turn-back-the-clock dunk with 41.6 seconds left in overtime. Butler had 22 points and nine assists, while Nikola Mirotic tied his season high with 20 points.

Butler, just 4-for-15 at the time, buried a tying 3-pointer with 48.2 seconds left. Wade followed with a steal from Eric Bledsoe. And then Butler hit a tough go-ahead jumper with 9.1 seconds left.

But Wade was called for a borderline foul on Booker's 3-point attempt with 1.5 seconds, and Booker failed to put the Suns ahead when he missed the third free throw, leading to overtime.

Cameron Payne, the centerpiece from the Bulls' perspective of the trade that sent Gibson and McDermott to the Thunder, didn't dress Friday because he's recovering from the flu.

Cameron Payne on joining the Bulls in trade from Thunder

"I get to come to a team where there are a lot of great pieces and I get to be a big-time contributor to it," Payne said.

The other new Bulls, Joffrey Lauvergne and Anthony Morrow, dressed but were held out.

Morrow backed off his plan to wear No. 1 after hearing from fans not ready to see someone else sporting Derrick Rose's old number.

"It's always a little alarming when you get traded midseason," Morrow said. "But I've never had a problem preparing and staying ready."

"We're 29-29. It's not like we're 40-and-something," Wade said about the trade. "The unfortunate part about everything is that we have no rotation. We don't know none of that right now. But that's no excuse. No one is going to care, our opponents. So we have to come out here as professionals, play hard and figure this thing out fast."