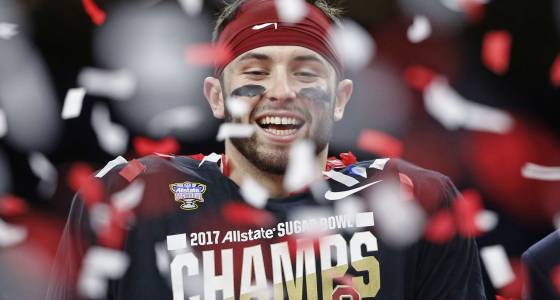 Mayfield, a Heisman Trophy finalist last year, was booked into the Washington County Jail after first walking, then running away and being tackled by an officer following an altercation near Fayetteville’s Dickson Street early Saturday, police said.

A preliminary police report said an intoxicated Mayfield first told an officer he was trying to break up an altercation, but that he later “was yelling profanities and causing a scene” while the officer questioned another man. After Mayfield was tackled, he refused to put his arms behind his back and was eventually forced into handcuffs before being arrested, police said.

Oklahoma spokesman Michael Houck said the school is aware of the incident and pursuing details.

Mayfield is known for his emotional demeanor and outgoing personality. He sported a horseshoe mustache during the Oklahoma State game last season that determined the Big 12 champion, saying there’s a new sheriff in town as a dig at the rival school’s Cowboy mascot. He also wore a shirt under his uniform proclaiming the Sooners the 2016 conference champions during the game, which the Sooners won 38-20.

Mayfield finished third in the Heisman balloting last year, and he set the FBS record for passing efficiency. He led the Sooners to a victory over Auburn in the Sugar Bowl and was the game’s MVP after passing for 296 yards and two touchdowns. In his best game of the season, he passed for 545 yards and seven touchdowns in a 66-59 win over Texas Tech.

Two years ago, Mayfield finished fourth in the Heisman balloting and led the Sooners to the College Football Playoff.

OU just sent me this statement on Baker Mayfield: pic.twitter.com/EPjcgYjNu6

Mayfield started his career at Texas Tech before sitting out a year, and he initially lost a year of eligibility upon transferring to Oklahoma because of transfer rules. Mayfield challenged Tech’s decision not to grant him the year of eligibility, and he was a vocal critic of Tech during the process, saying the school’s decision did not make sense because he was never on scholarship there.

After last season’s win over Oklahoma State, Mayfield announced that he intended to return for his senior season, in part because of the battle for the extra year of eligibility.

“I’ve dreamed of playing at this place for too long,” he said after the Oklahoma State game. “I fought for that extra year of eligibility for too long. I had everybody working on that. It’s not a feeling that I owe anybody that put the effort in. It’s just that we all did that for a certain reason.”