The Nuggets are trying to rebuild their home-court edge this season with one scoreboard-straining performance after another.Denver entered Sunday's game against the Memphis Grizzlies averaging nearly 117 points in its last 10 home games, winning eight of... 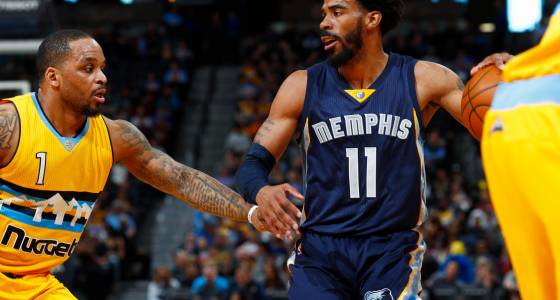 The Nuggets are trying to rebuild their home-court edge this season with one scoreboard-straining performance after another.

Denver entered Sunday's game against the Memphis Grizzlies averaging nearly 117 points in its last 10 home games, winning eight of them. The Nuggets have made it clear that the quest for their first postseason appearance since 2013 will happen at hyperspeed.

Facing the Grizzlies, though, means trying to stay on course while applying brakes to the runaway train. As one of just three teams in the NBA that allow less than 100 points per game, Memphis is notoriously adverse to surrendering easy buckets.

The Nuggets' prolific offense couldn't change that reality Sunday, handicapped by several lengthy scoring droughts in a 105-98 loss in front of 18,024 at the Pepsi Center.

"We didn't play our style. They made us play their style," said Nuggets center Nikola Jokic, who finished with 10 points, 11 rebounds and six assists. "That's really why they won the game."

The Memphis style is draped in toughness. The Grizzlies believe that if they are going to spend 48 minutes on a basketball court, they may as well dish out some bruises in the process.

The DNA of another win for the Grizzlies over the Nuggets — the fourth straight for Memphis in the series — was found in a plus-10 edge on the boards (49-39) and a 21-13 advantage in second-chance points. In a game that didn't feature a double-digit lead until the closing minutes, those were the plays that mattered.

"We'd cut it to five, get a stop, and then they'd get a loose ball, offensive rebound and go on a 5-0 run," Nuggets coach Michael Malone said. "It was from the beginning of the game all the way to end of the game. We didn't rebound well enough."

The Grizzlies flexed their defensive muscle during a particularly stout stretch in the third quarter.

Things were looking bright for Denver when Jameer Nelson cut for a layup on a crisp feed from Gary Harris for a 62-56 lead, part of a blitzing offensive run to start the second half for the Nuggets.

Denver wouldn't score again for more than five minutes. The Grizzlies clamped down, taking away first, second and third options in the Nuggets' offensive sets and limiting the paint chances Denver had been able to hunt down earlier in the period.

The Nuggets (26-33) could have been sunk by the drought. Instead, they kept one empty offensive possession after another from affecting their defense. Memphis (35-25) went on a methodical 11-0 run after Nelson's basket, but after Will Barton and Jamal Murray finally ended the scoreless stretch with back-to-back 3-pointers, the game was tied 68-68 entering the fourth quarter.

"I thought our defense was pretty good overall," Malone said.

Memphis had the horsepower and grit to wrestle away victory in the fourth quarter. The big three for Memphis of point guard Mike Conley and big men Marc Gasol and Zach Randolph led the way. Conley scored 13 of his game-high 31 points in the fourth. Randolph had 20 points and 11 rebounds, and Gasol added 23 points.

Conley scored five straight points with about five minutes left in the fourth quarter. His step-back 3-pointer with 4:21 gave the Grizzlies their biggest lead of the game to that point at 87-79.

"I don't think he's made the all-star team, but in the eyes of all NBA coaches, he is an all-star," Malone said of Conley. "He's that good. He's always under control, runs his team and makes the right play."

Gasol essentially ended the Nuggets' ensuing comeback bid when he knocked down a 3-pointer — his third of the game — to put Memphis up 92-83 with 2:03 left.

Harris added to his recent hot streak, leading the Nuggets with 19 points. Danilo Gallinari scored 24 points on 6-of-16 shooting.

The Nuggets, whose lead for the final spot in the Western Conference playoff race was trimmed to one game, begin a two-game road trip Tuesday at Chicago.

"We definitely need to find that second wind," said Harris, who is averaging 22.3 points over his last four games. "We have a tough schedule coming up, so we have to be ready to play."