TAMPA — One of baseball’s oldest clichés is missing from Yankees camp.“I’ll do anything to help the team,’’ is uttered often when a player or pitcher is asked what position he wants to play, where he would like to hit in the order and whether... 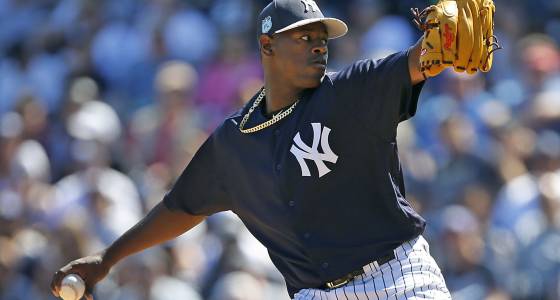 TAMPA — One of baseball’s oldest clichés is missing from Yankees camp.

“I’ll do anything to help the team,’’ is uttered often when a player or pitcher is asked what position he wants to play, where he would like to hit in the order and whether he prefers being a starter or reliever.

That hasn’t been the case in the second and third exhibition games for the Yankees, who have five pitchers vying for the final two spots in Joe Girardi’s rotation.

One day after Adam Warren was firm in his stance that he prefers to start, Luis Severino followed with a plea to be in the rotation.

“I want to be a starter,’’ Severino said following two solid innings against the Blue Jays’ junior varsity at George M. Steinbrenner Field on Sunday. The Jays also played the Phillies in Dunedin.

Joining Warren and Severino in the field of candidates for the fourth and fifth starters are Chad Green, Luis Cessa and Bryan Mitchell.

Like Warren, Severino won’t sulk if used in relief, a spot the 23-year-old right-hander was stellar in last year when he worked 11 games and went 3-0 with a 0.39 ERA in 23 ¹/₃ innings in which he fanned 25 after failing as a starter when his changeup vanished from his tool belt.

On the advice of pitching coach Larry Rothschild, Severino worked on rediscovering the changeup this offseason in the Dominican Republic.

“I worked on the same stuff Larry told me to work on, mechanics and throw the changeup in the same spot as my fastball,’’ said Severino, who explained he threw the change more than the slider Sunday.

Severino didn’t alter the grip on the changeup or his release point. Instead, the more he threw it working out, the more he believed in it.

“I have a lot of confidence in the changeup,’’ said Severino, who many believed was hurt as a starter last season by not having a third pitch to mix in with the fastball and slider.

An 0-8 ledger with an obese 8.50 ERA in 11 starts and a yearning to pitch every fifth day instead of waiting for the bullpen phone to ring fueled Severino’s desire to make the changeup his third pitch.

“For me it’s my most important pitch. You can’t be a starter with two pitches, you need more than two pitches,’’ Severino said.

Adam Warren: My skill can keep me from Yankees job I want 0:0 CLEARWATER, Fla. — Adam Warren made it clear what part...

Girardi’s theory as to where Severino’s changeup went last year centers on increased speed on his fastball, which left the separation between fastball and change (optimally 10 mph) different.

“His velocity went up and his changeup was too hard,’’ Girardi said of Severino, whose fastball was 97 mph and his change 90. “That’s what we are working on.’’

While the changeup was a big reason for his poor performance as a starter following a solid big league debut in 2015, when he went 5-3 with a 2.89 ERA in 11 starts, there were other reasons.

“His command wasn’t as good and people saw him, especially in our division,’’ Girardi said of the AL East hitters. “They knew he had a good fastball and a good slider. When you are trying to get through a lineup for a second and third time, you have to incorporate more than two pitches or you better be really, really good at locating your other two.’’

Two innings against a lineup dotted with minor leaguers doesn’t mean Severino’s changeup is back. But if it’s confidence that makes the pitch, then Severino will make a strong pitch to be one of Girardi’s five starters.