Northwestern travels to Indiana needing a win over reeling Hoosiers

Indiana knows pain this season.Northwestern is hoping to know gain. The Hoosiers — whose erratic season began with November victories over Kansas and North Carolina and a loss to Fort Wayne — haven't been the same team for the duration of 2016-17. Season-ending... 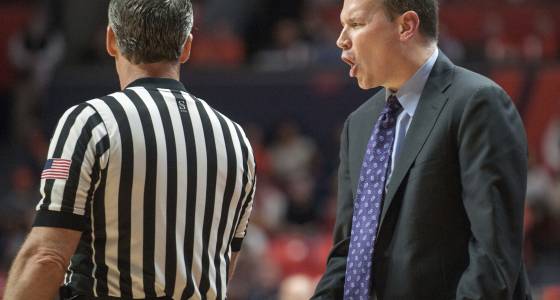 Northwestern is hoping to know gain.

The Hoosiers — whose erratic season began with November victories over Kansas and North Carolina and a loss to Fort Wayne — haven't been the same team for the duration of 2016-17. Season-ending injuries to OG Anunoby and Collin Hartman have caused a combined 46 missed games. James Blackmon Jr. didn't play the last time the Hoosiers and Wildcats met, a 68-55 NU victory in Evanston.

But Blackmon will be back for Saturday's game in Bloomington, Ind., the latest in a long line of pivotal games for the Wildcats, who with a victory would come closer to securing the program's first berth in the NCAA tournament and set a school record for wins in a season.

"You don't lose an OG and a Collin Hartman before the season and not have it affect your team," NU coach Chris Collins said. "They've had to figure it out, as have we. Everybody has those times where you have to figure out a way to reinvent your team."

The Wildcats (20-8, 9-6 Big Ten) had forward Aaron Falzon, a starter last season as a freshman, for a total of 24 minutes before his season ended because of knee surgery. They also were without center Dererk Pardon (hand surgery) for eight games and leading scorer Scottie Lindsey (mononucleosis) for four.

Assembly Hall and its residents weren't kind to the Wildcats on their last trip, an 89-57 Indiana victory that was part of a five-game NU losing streak.

Collins said Friday the Wildcats are expecting the Hoosiers' best and have prepared for the burst. Indiana took a 10-0 lead in last year's meeting in Bloomington and led by 17 by halftime.

Photos from the Northwestern-Indiana college basketball game on Sunday, Jan. 29, 2017, at Welsh-Ryan Arena.

"The thing we talked about was how at home they have an extra burst, especially to start the game," Collins said. "You've got to withstand that early rush. Last year we didn't and it was over quick.

"We referenced that game for that only. It's a new year; it's a new team."

The Hoosiers (15-13, 5-10) have lost five in a row since a triple-overtime victory against Penn State on Feb. 1 and have come up short in seven of their last eight.

Northwestern has lost four of six but has a lot more on the line this time around. The Wildcats held a team meeting after their 66-50 loss to Illinois on Tuesday in Champaign.

Junior guard Bryant McIntosh didn't curb his emotional urgency after that game, suggesting the Wildcats had better figure out a solution to their woes, especially on offense, before it's too late.

"If we don't, we'll lose the next one," he said. "We have to respond. Some guys need to do some soul searching and figure it out."

The Wildcats also will have to figure out Blackmon, who missed three Big Ten games with a lower-leg injury. He's fifth in the conference in scoring with 17 points per game and leads with 3.1 3-pointers per game.

"Our guys have a pretty good feel for who they are," Collins said. "We didn't see Blackmon, so that will be a little bit different, adding an explosive scorer to the mix."