Norman Powell storming through the postseason for Raptors

Who would have thought that on a Toronto Raptors team led by Kyle Lowry and DeMar DeRozan, Norman Powell would be such a high-impact player in the postseason?Raptors coach Dwayne Casey saw it in last year's postseason. At one point during that playoff run,... 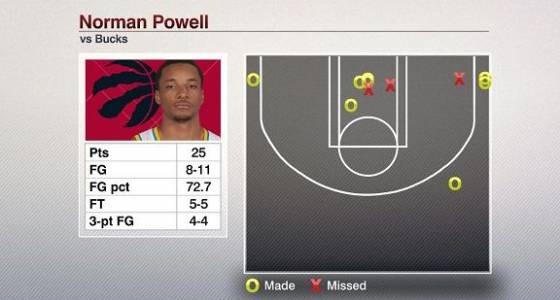 Who would have thought that on a Toronto Raptors team led by Kyle Lowry and DeMar DeRozan, Norman Powell would be such a high-impact player in the postseason?

Raptors coach Dwayne Casey saw it in last year's postseason. At one point during that playoff run, he said, "The way [Powell] has played, produced, he has met the challenge," even though Powell finished the postseason averaging 3.8 points.

Even with his coach's previous compliments, there was no reason to think Powell would be any sort of difference-maker in the 2016-17 postseason. The Raptors went 9-9 in the games Powell started this season. He scored 8.4 points in 18 minutes per game in the regular season.

But Powell has excelled at outperforming expectations. He was the 46th pick of the 2015 NBA Draft (by the Milwaukee Bucks, who traded him to Toronto), but he has scored the 12th-most points from that class (and more points than anyone picked 14th or below). On Monday, he scored 25 points on 8-of-11 shooting, including 4-of-4 from 3-point range.

Powell was 3-of-3 from 3-point range in his Game 4 start, and per the Elias Sports Bureau, that makes him the fifth player to be perfect from 3-point range and make at least three 3-pointers in consecutive postseason games (the others are Jeff Hornacek, Robert Horry, Norris Cole and Mike Miller). Of the seven 3-pointers Powell made, only one was a contested shot, which means he has taken advantage of being the open man.

Casey has upgraded his assessment of Powell.

"In this series, he's been the X factor," Casey said.