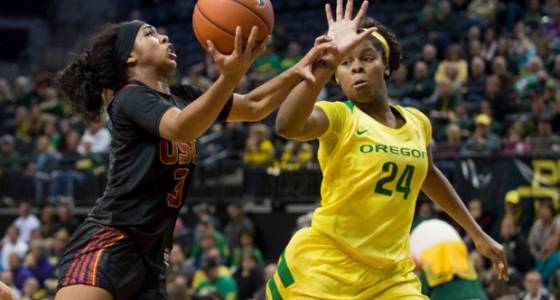 EUGENE -- Erica McCall had 16 points and 14 rebounds and No. 8 Stanford rebounded from a loss at No. 10 Oregon State with a 65-59 victory over Oregon in the regular-season finale for both teams Sunday.

Stanford (25-5, 15-3 Pac-12) wrapped up the No. 2 seed and a first-round bye in the conference tournament that starts Thursday in Seattle. Karlie Samuelson added 18 points for the Cardinal, who led by as many as 13 points.

Sabrina Ionescu had 18 points and seven rebounds for Oregon (18-11, 8-9) which lost its third in a row. Lexi Bando's three-pointer pulled the Ducks to 56-51 with 2:35 left but they couldn't get closer until Ionescu made free throws to close the gap to 58-54.

Free throws from Marta Sniezek put Stanford up 61-54 before Ruthy Hebard made a layup and a free throw for Oregon with 52 seconds left, but the Ducks couldn't catch up.

The Cardinal were coming off a 50-47 loss at Oregon State on Friday night. The Beavers (27-3, 16-2) clinched a share of the Pac-12 regular-season title with the victory, and won it outright earlier Sunday with a 71-56 victory over California. Oregon State was picked to finish fifth in the conference.

The Beavers also clinched the top seed in the Pac-12 tournament, followed by No. 2 Stanford, No. 3 Washington and No. 4 UCLA. The top seeds get a bye to open the tournament.

Ionescu hit a three-pointer that pulled Oregon to 12-11 and Maite Cazorla hit free throws to give the Ducks a brief lead before Briana Roberson's three-pointer for Stanford.

The Ducks closed to within 49-44 late after Gildon's tip in and Ionescu's short jumper with 7:19 left. But Stanford extended it again with Roberson's jumper and Nadia Smith's layup. The Ducks again narrowed it to 53-48 on Oti Gildon's layup with just over five minutes to go.

Oregon: The Ducks played the Australian national anthem before the game in honor of senior Jacinta Vandenberg, who is from Melbourne. Oregon also honored junior Megan Trinder on senior day. Trinder, who is also Australian, has had two ACL injuries in as many years. Her availability for her senior season is uncertain.

Stanford: The Cardinal have a first-round bye for the Pac-12 tournament in Seattle.

Oregon: The Ducks' opponent to open the tournament had not been determined.