No. 7 Louisville rebounds with win over Syracuse

CaptionCloseLouisville, Ky.Donovan Mitchell made six 3-pointers for 25 points, Ray Spalding added 18 points with 11 rebounds and No. 7 Louisville shot 57 percent to pull away for an 88-68 victory over Syracuse on Sunday.Seeking a second-place tie with Florida... 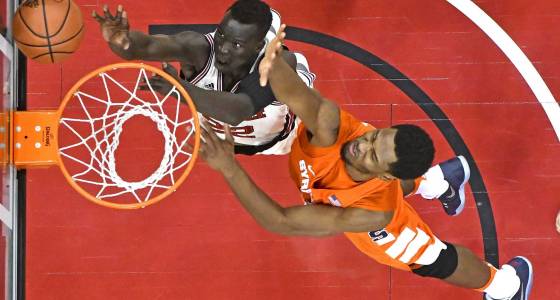 Donovan Mitchell made six 3-pointers for 25 points, Ray Spalding added 18 points with 11 rebounds and No. 7 Louisville shot 57 percent to pull away for an 88-68 victory over Syracuse on Sunday.

Seeking a second-place tie with Florida State in the Atlantic Coast Conference, the Cardinals rode a 14-4 run entering the break for a 15-point lead that grew to 23 early in the second half before some shaky play.

Mitchell shot 9-for-16 from the field to lead four Cardinals in double figures. A revamped starting frontcourt featuring Spalding helped as the sophomore forward tied a career high in points while posting his second career double-double.

Deng Adel had 17 points and Quentin Snider 12 for Louisville.

Central Florida 53, Cincinnati 49: B.J. Taylor scored 27 points and 7-foot-6 Tacko Fall had seven points and four blocked shots to help UCF pull the upset over the No. 15 Bearcats. It was the first time in nine meetings that the Knights defeated Cincinnati (25-4, 14-2), which was trying to stay in step with American Athletic Conference-leading SMU. The Knights (19-10, 10-7) won their fourth straight game and recorded their first win over a Top 25 opponent since defeating No. 4 UConn in 2011.

Michigan St. 84, Wisconsin 74: Nick Ward had 22 points and nine rebounds, Miles Bridges had 17 points and Matt McQuaid added a season-high 15 for Michigan State. The Spartans (18-11, 10-6 Big Ten) have won six of their last eight games, moving them into a third-place tie in the conference and perhaps sealing their spot in a 20th straight NCAA Tournament. The 16-ranked Badgers (22-7, 11-5) have lost four of five and lost a chance to pull into a first-place tie with No. 14 Purdue. Nigel Hayes scored 22 points for Wisconsin.

Butler 88, Xavier 79: Kelan Martin scored 25 points and No. 22 Butler followed its biggest road win of the season with yet another. The Bulldogs (23-6, 12-5 Big East) were coming off a 74-66 victory at No. 2 Villanova, one of the biggest road wins in their history. They kept the momentum with a strong finish, outscoring Xavier 19-8 down the stretch for their fourth straight win. Xavier (18-11, 8-8) has lost five in a row, its deepest slump in 35 years. Trevon Bluiett led the Musketeers with 21 points.