No. 5 UCLA dominates boards to edge No. 4 Arizona 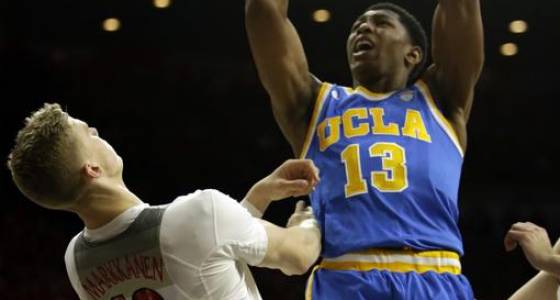 TUCSON, Ariz. — Thomas Welsh scored 12 of his 14 points in the second half and No. 5 UCLA dominated the offensive boards to beat No. 4 Arizona 77-72 in a Pac-12 showdown Saturday night.

The Bruins (26-3, 13-3) snapped Arizona's 21-game home court winning streak and dropped the Wildcats (26-4, 15-2) into a tie with Oregon for first place in the Pac-12 heading into the final week of the regular season. The Ducks hold the tiebreaker by beating Arizona in the teams' only meeting.

Allonzo Trier scored a career-high 28 for the Wildcats.

No. 5 Oregon 75, Stanford 73: Jordan Bell scored on a putback with 14 seconds left to give Oregon a rare Bay Area sweep.

Monte Morris had 17 points with seven assists for the Cyclones, who have their longest winning streak in league play since a seven-game stretch in 2005.

Brown shot 11 for 18 and had four assists, while his teammates shot just 11 for 40 with four assists combined. Yet it was enough for the Hurricanes, who dominated inside and outscored Duke 40-20 in the paint.

No. 11 Kentucky 76, No. 13 Florida 66: In Lexington, Ky., Malik Monk scored 30 of his 33 points in the second half and Bam Adebayo added 18 points with 15 rebounds as Kentucky took over the Southeastern Conference lead.

Miles went to the free throw line after a questionable foul against Jaylen Fisher, who never left the ground and appeared to make only slight incidental contact with Miles.

Derrick Walton added 17 points and 11 rebounds and the Wolverines, who have won five of six.

No. 17 SMU 69, Connecticut 61: Shake Milton had 20 points and seven rebounds to lead SMU at Hartford, Conn.

No. 19 Florida State 76, Clemson 74: Xavier Rathan-Mayes scored 13 of his 15 points in the second half, including the go-ahead basket with 1:22 left, to lift Florida State at Clemson.

Jonathan Isaac of Florida State blocked Shelton Mitchell's drive with 11 seconds left and, after Trent Forrest made a free throw for the Seminoles, Marcquise Reed came up short on a mid-range jumper with 5 seconds to go.