No. 13 Florida loses at No. 11 Kentucky in battle for first in SEC

LEXINGTON, Ky. — Not satisfied with making perimeter jumpers, Malik Monk drove to the basket to create numerous opportunities at the free-throw line and found openings to feed his Kentucky teammates. 1 Day Ago3 Weeks Ago13 Hours AgoThe freshman guard wasn't... 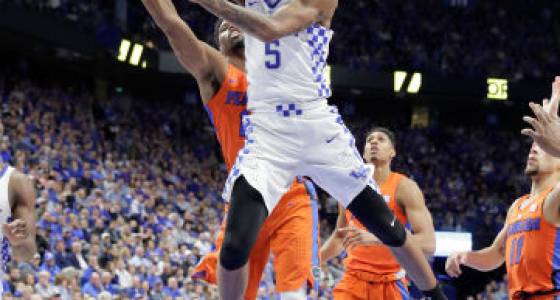 LEXINGTON, Ky. — Not satisfied with making perimeter jumpers, Malik Monk drove to the basket to create numerous opportunities at the free-throw line and found openings to feed his Kentucky teammates.

The freshman guard wasn't aware until afterward of how many points he had piled up, but he knew they helped the 11th-ranked Wildcats earn their most important victory this season.

Monk scored 30 of his 33 in the second half, Bam Adebayo added 18 points and 15 rebounds and Kentucky rallied past No. 13 Florida for a 76-66 victory Saturday to take over the SEC lead.

"I didn't know about that until after the game," said Monk, who made 10 of 11 free throws and five 3-pointers along with a team-high five assists. That contribution definitely came in handy as point guard De'Aaron Fox missed the game with a knee contusion.

"I was just playing, but it was crazy," Monk added. "I was way more patient in the second half than I was in the first half."

While another week remains in SEC play for both teams, the Wildcats (24-5, 14-2) took an important step toward clinching the regular-season title by twice rallying from eight points down to win the pivotal matchup. They can thank Monk for making it happen as he scored 14 during an 18-10 run that tied the score at 55 with 9:54 left and seemed to have an answer for every defense Florida (23-6, 13-3) used to try to contain him.

"We had a couple of options that did a good job on him in Gainesville," coach Mike White said. "We just didn't do quite as good of a job (in Lexington), especially down the stretch."

The Wildcats outrebounded Florida 48-30 after the Gators owned the boards 54-29 in the first meeting in Gainesville three weeks ago. Since that game, an 88-66 Florida victory, the Gators have lost starting center John Egbunu to a torn ACL.

NO. 19 FSU 76, CLEMSON 64: Florida State coach Leonard Hamilton was glad to see his players smiling, laughing and celebrating a win on the road. It had not happened too often for the Seminoles in ACC play this season.

"They were very, very happy in the locker room," said a relieved Hamilton, whose team rallied after leading most of the way.

FSU (23-6, 11-5) came into Littlejohn Coliseum 2-5 on the road in league play, including consecutive at Notre Dame and Pittsburgh. But Xavier Rathan-Mayes hit the go-ahead basket with 1:22 left, and the Seminoles hung on.

TULSA, Okla. — Kitija Laksa made 6 of 6 3-pointers, a program first, and scored 34 as USF locked up the third seed for the AAC tournament with a 90-64 win over Tulsa.

"This is a big win for us because this is win No. 22 for us on the year and you get that bye in the first round of the tournament," head coach Jose Fernandez said.

USF's next game is at home Monday against No. 1 UConn, which has a 103-game winning streak and routed the Bulls 102-37 earlier this season.

"Our kids understand how we've played against Connecticut," Fernandez said. "I'm sure they'll be looking forward to playing that game again."