INDIANAPOLIS -- Tuesday was "Franchise Legend Departure Day" in the NFL. Adrian Peterson, Darrelle Revis and Jamaal Charles will someday get their jerseys retired by the teams that fired them, but in the meantime all three players have to navigate... 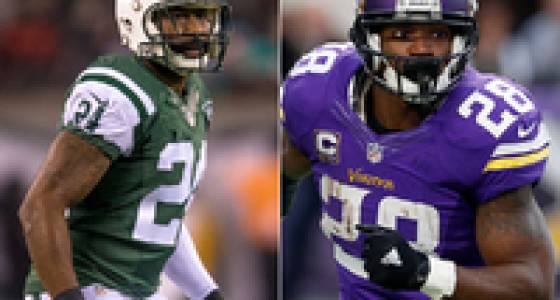 INDIANAPOLIS -- Tuesday was "Franchise Legend Departure Day" in the NFL. Adrian Peterson, Darrelle Revis and Jamaal Charles will someday get their jerseys retired by the teams that fired them, but in the meantime all three players have to navigate the ugly realities of aging in professional football.

Peterson could still wind up returning to the Vikings. Minnesota had no choice but to decline his $18 million option for 2017, but he may find out that the Vikings are willing to pay him more than any other team. Charles and Revis face far less certain futures.

Now 30, Charles has only been able to handle 83 carries combined over the last two seasons. NFL Network Insider Ian Rapoport reports that Charles is healthy again, but only time will tell if he is still able to handle the rigors of the running back position at a high level.

Revis may need to wait for his recent legal troubles to play out before attracting interest, but even then there's an open question of whether he'll want to play. The Jets owe Revis $6 million guaranteed in 2017 on the disastrous, sentimental contract they signed him to in 2016. The contract has offset language in it according to ProFootballTalk, which means that Revis essentially would need to find a team willing to pay him more than $6 million or he would essentially be playing for "free" in 2017. (The Jets will root for Revis to get a job, since then they will be on the hook for less money if he signs elsewhere.)

Throughout his career, Revis was always in search of the next big deal, trying to find fair market value in a system set up against players doing so. His final contract, one that general manager Mike Maccagnan surely regrets, could wind up getting Revis to Canton one year earlier. Why keep playing when the Jets are paying him so much to go away?

As the league gears up for the start of the combine, here's what else we learned Tuesday:

1. The Chiefs were going to cut Charles because it didn't make financial sense to pay him more than $6 million when they had Spencer Ware and Charcandrick West in house. But it was hard not to draw a connection to Charles' departure and Eric Berry's new market-setting contract for safeties. I've read criticism that the Chiefs paid Berry more than they had to by handing over $40 million in guarantees, but that's silly logic. Safeties in today's NFL are worth as much as top-shelf cornerbacks. The 28-year-old would make even more money if he made it to the open market and there comes a point where teams should be fair with core players they truly value as leaders.

2. Berry's contract inspired speculation that the team could now use the franchise tag on defensive tackle Dontari Poe. I'd expect the team to let Poe hit the market because he simply hasn't performed like a star over the last two years. Kansas City gave little known guard Laurent Duvernay-Tardif a big extension Monday, showing where the team's priorities stand.

3. The news of Jairus Byrd's impending release by the New Orleans Saints was another reminder how risky free agency can be. The safety received more guaranteed money than any free agent in 2014 and wound up providing little impact for the Saints, even when he wasn't hurt. That's why teams like the Chiefs are smart to spend money on their own players rather than looking for what's behind door No. 2 in free agency. You know what you are getting. Byrd won't even crack our Top 101 Free Agents list after the news.

4. Peterson landed at No. 16 on the list, while Charles is at No. 47. The ranking is created by averaging the ranks of Chris Wesseling and myself. Wess was more optimistic about the prospects of both players, especially Charles. In a best-case scenario, Charles figures to be a quality role player. That puts him behind guys like LeGarrette Blount in my mind. Peterson has a higher ceiling. He's defied injury and age expectations before and could still add a lot of juice to a team looking for early down help. Wesseling did a great job putting together landing spots for Peterson. If he doesn't return to Minnesota, Tampa Bay makes a lot of sense.

5. I've made it this far without mentioning Washington's decision to place the franchise tag on Kirk Cousins. I heard from front office sources from two different teams that expressed surprise about the Redskins using the "exclusive" tag on Cousins. In theory, this gives Washington more control over possible trade talks. Cousins' agent is now not allowed to shop his client elsewhere in a possible trade. That hardly prevents a trade offer from happening, but it might make it more difficult.

In the end, the move to use the exclusive tag was viewed as a tactic to make it more likely the Redskins keep Cousins for nearly $24 million. Perhaps the Redskins just wanted to make sure they weren't bidding against any other teams as they try to sign Cousins long term.

6. It was also noteworthy to learn Tuesday who didn't get tagged. Rapoport reported the Patriots won't tag Dont'a Hightower, while the Buffalo News reported that the Bills won't use the tag on cornerback Stephon Gilmore. That's welcome news in a free-agent market where many of the best players are accounted for more than a week ahead of free agency. Hightower and Gilmore will climb into our top six players available overall.

7. Finally, it wouldn't be 2017 without some Tony Romo heat. Rapoport reported that Romo will not be released until March 9 when the new league year starts, assuming the Cowboys can't find a trade partner. That will spread out the team's salary-cap hit. Rapoport believes the Broncos are in the driver's seat to land Romo, if he's willing to take less money to join Denver. The Broncos have been the most likely landing spot in my mind all along precisely because they don't need him. While other teams scramble to fill their vacant quarterback depth charts, the Broncos can wait, confident they have two solid, cheap options if Romo takes more money elsewhere.